While my photography has seemingly plateaued in competition of late, I have been quite pleased by the success of my Crate Art Projects.  Three of them – Honeywell Farms, Hi Norman’s Kill Dairy and Soda Crate Hope Chest – all picked up ribbons and money at the 2017 New York State Fair, which has given me quite a tremendous amount of hope for future projects.

Now comes a project that I’m specifically building for an upcoming charity event, and I hope it draws a ton of money.

In my travels, I’ll stop at flea markets, yard sales, antique stores, salvage yards, looking for any project that will benefit my future creativity.

And in an antique store in Waterford … I found it.  A vintage Saratoga Vichy bottle crate.  It had just the right amount of class and distress, the wood had a sweet, smoky patina to it, and the words “SARATOGA VICHY” stood out bright and clear.

And it was on sale.

A little haggle-speak later, and the crate had a new home.

Now comes the crate-bashing.  Thankfully, this was assembled with nails – nails that were easily pried out of the wood without damaging the patina or the integrity.  I used one outside panel, and the writing from one inside panel, to make the side walls of my finished crate project. 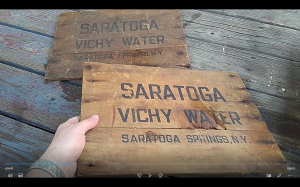 The base.  I need a wooden base.

A quick measure of what I needed.  Planks that could be trimmed to 16 1/2″ in length.

Off to Curtis Lumber.  Did you know that if you ask nicely and you don’t have half a tree to trim down, Curtis Lumber can custom-cut your planks as needed?

“Sorry, Curtis is on a break.”

“Well, then is Curtis available?”

“Sorry, Curtis is helping other customers.”

“Okay, then let me speak to Curtis.” 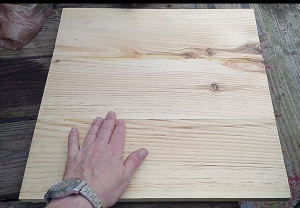 A little wood glue, a little stain, some reinforcing screws with the use of some leftover planks from the original crate…

Using a Forstner drill bit, I carved recesed holes into the wood base, where I would insert the vintage water bottles. 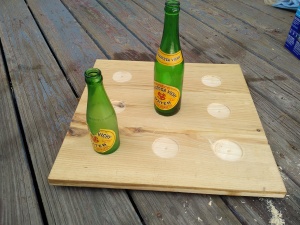 The water bottles came from various eBay sales – a 12-ounce bottle, two 7-ounce bottles, and half a dozen shorter 7-ounce bottles, all nine green-glass bottles of Saratoga Vichy mineral water – perfect for mixers, for health, or for manufacturing into 21st-century art.  Okay, that last part came from me. 😀

I wanted to make this project dance.   These bottles used to contain magic mineral water, the 19th century elixirs of good health.  The mineral springs helped build the Saratoga Springs empire – you wouldn’t have the health spas and gambling and horse racing without them.

I wanted these bottles to dance.

And I went back to the last time I made a project dance – I called my friends at CoolNeon.com to get some moldable, bendable electro-luminescent wire for this project.

Luck was with me.  CoolNeon just developed a brand new sequencer, the CAT-09, which provides the EL wire with different flashing patterns. 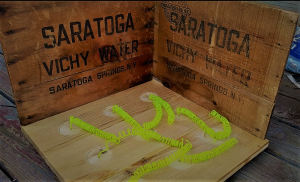 “We’re glad you came back to CoolNeon,” the owner told me.  “We’ll get your order out as quickly as we possibly can.  We’re kind of in a crunch for time right now, so it might take a few days to get your order fulfilled.”

What’s going on that’s causing such a crunch for time?

“Yeah, we’re being slammed for orders – people want to use our EL wire for Burning Man.”

Yeah… I think Chuck’s a bit too old to dance naked through the Nevada desert, hyped up on MDMA and Red Bull.  No no no. 🙂

Meanwhile, I drilled pilot holes into the wood base, and once the EL wire arrived from CoolNeon.com, I threaded nine CoolNeon.com wires through the base.

After I made sure the EL wire was secured, I had to drill holes in the bottoms of my Saratoga Vichy bottles.  Thankfully, I got my mitts on some diamond-tipped hole saw drill bits. 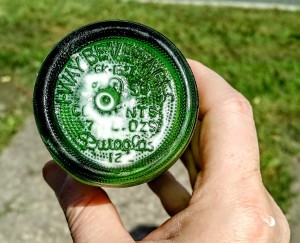 The procedure for drilling holes in glass bottles is such.  Place some plumber’s putty around the area where you plan on drilling.  Add some sort of coolant – I chose antifreeze – and squirt same into the central area for drilling.  That “central area” would be the middle of the bottle base, surrounded by plumber’s putty.  Then add the drill bit, starting at a 45-degree angle, and then slowly raising your drill to a straight shot.  Drill in sections, taking breaks to cool down the drill bit with antifreeze.  And…

You will see a hole in the bottom of the bottle.

I had ten bottles and I needed nine.  So I had at least one “mulligan” bottle that I could spare if it broke.

I made it through the first four bottles without any breaks.  Then I took a break.  Ha.  Work break, not bottle break.  Geez, readers, give me a break…

By the end of the day, through patience and persistence, I successfully drilled pilot holes in nine bottles.  I’ll save the tenth one – the “mulligan bottle” – for a windowsill decoration or something.

By the way, your hands will smell like plumber’s putty and ethylene glycol for hours after this project is complete.  You may as well go to the gas station and pour some unleaded on your hands, if unleaded wasn’t north of $2.60 a gallon right now.

I then threaded each EL wire through the base hole in each bottle, then applied some E6000 bonding compound to secure each bottle to the wooden base.

And now … the moment of truth.  Will this work?

So this is my Saratoga Vichy Crate Art Project, and it honors the sparkling waters of the Saratoga Springs Water Company – from its original Vichy mineral water to the bottled spring water of today. Thanks also to CoolNeon / Funhouse Productions, Curtis Lumber, the various hardware stores that sold me parts and other goodies, and that little antique store in Waterford that originally sold me the crate.

So what am I going to do with this beauty?