Every so often in our lives, we come across images of things from our past.  And we want to do something with those images.

For me, it took a lot of procrastination – but then, just out of nowhere, I created something.

For more than 50 years, Hoffman’s Playland was a summertime place of fun in Latham.  It was a small amusement park, complete with Ferris wheels, bumper cars, roller coasters, and the like.  In 2014, unfortunately, the park closed.  Many of the rides moved to downtown Albany and became part of Huck Finn’s Playland, an adjacent amusement park next to the furniture outlet store.

But there was that iconic sign – the one with the fluttering arrow lights and the cheery clown – that I remember.  I remember it every time I drove along Route 9.

During one of my photo opportunities, I captured an image of that sign.  I entered it in competition – it didn’t do well – and then later I entered it in BUILT, where it sold for a nice price.

But I wanted to return to that sign one more time.  I wanted to create something that really brought the excitement and enjoyment of Hoffman’s Playland back to life.  That whole concept of “would Daddy stop the car as we drove by the Playland, or would we have to sadly watch as Daddy drove by and hope that we would visit the Playland on another trip.”

First, I acquired a 34×36 plank of wood from Curtis Lumber, and applied a large-sized print of the Hoffman’s Playland sign to the plank.  I looked around for several different adhesives, and the one I found that did the best job was some Elmer’s super-glue stick.  A few rubs here and there, and the artwork stuck to the board like – like – like super-glue, to be precise.

I’ll have to trim off that white border, or maybe I’ll cover it with a picture frame.  Right now all I want to do is make sure this picture stays put.

Fifty holes on the left side.  Twenty-three on the right side.  And then, one final drill hole in the clown’s nose.

Here’s where I’m at.

Those holes might look a bit rough … but I hope I can cover them up with some rubber gaskets – which should also have the additional benefit of holding the lights securely in place.

Now if you see the “HOFFMAN’S PLAYLAND” lower sign – you might notice that part of the sign is dark.  It’s hard to ignore it – look at the first “l” in “Playland” and the space between the two “F’s” in “HOFFMAN’S” and you can see what I’m talking about.  I could have tried to digitally enhance and brighten that part of the sign, but I had a better idea.

One quick road trip to A.C. Moore, and I found some plastic adhesive-backed rhinestones.  Hundreds of them, just waiting for me to cut and trim them to the proper locales.  A little trim here, a little cut there, and I’m going to cover the signage in bright, glittery rhinestones.

The “HOFFMAN’S” was easier to craft – those letters are nice and blocky – but the script “PLAYLAND” was an adventure.  And then I had to cut square rhinestones to fit in the letter gaps – like the interior part of the “d” in “PLAYLAND,” for instance.

This is kind of tricky.  But after a lot of practice and adjustment, and the better part of my efforts, I did finish the “PLAYLAND” section of the sign.  And I gotta tell you … these blue rhinestones may be inexpensive, but they glisten like Swarovski crystals.

A few days later, I finished up the illuminated portions of the sign.  The “HOFFMAN’S PLAYLAND’ portion was completed with adhesive red, white and blue rhinestones.  The clown’s head took several different multi-colored miniature rhinestones … but damn it sparkles. 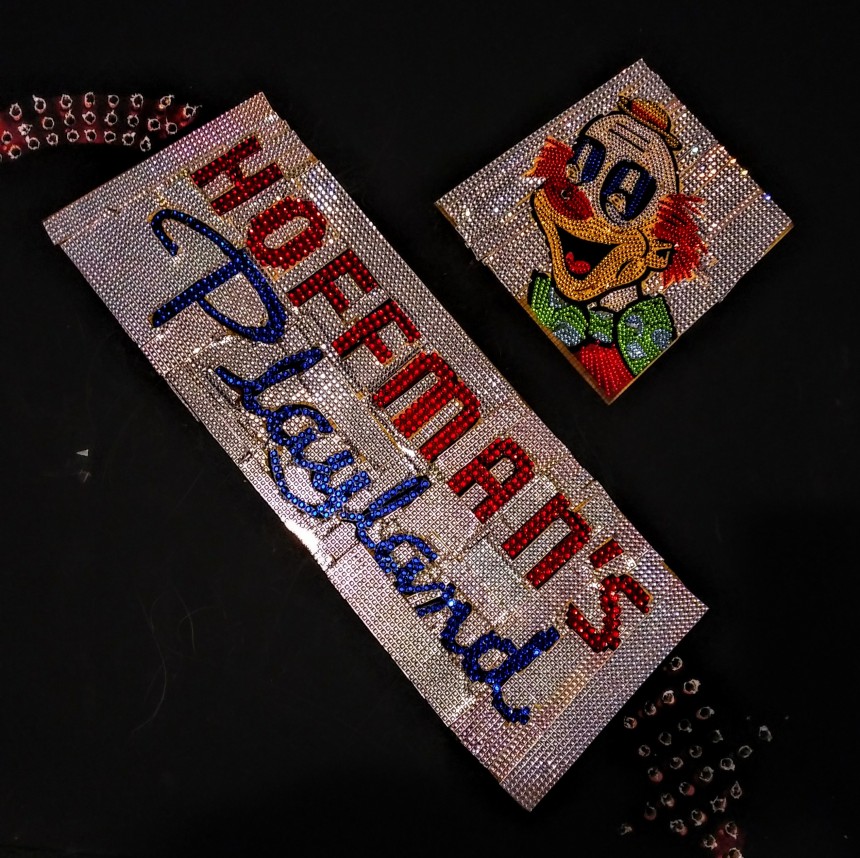 One step down … one step to go.

And that step was last Sunday.  After drilling all those holes to represent the lights, I found that the holes I drilled were approximately 1/16″ too small.  So … back to the hardware store for a larger drill bit, and 79 holes re-drilled and reamed out.

Then I threaded a strand of Christmas lights through the holes.  Unfortunately, I missed reaming out one of the holes – and as I tried to force the light in, the light broke.  And I couldn’t get a spare.  And when that light went out, it took out some of the chase lights with it.

So I have a replacement string of lights on the way.  They should arrive at some point in time.

I then added rubber washers to cover up the drill marks, and duct-taped the wires in the back to keep everything stable.

I’ll add hanging wire at some point … but for now, I’m just testing the lights in sequence.

Oh yeah, and I posted my progress on social media.

So … here's how I spent my Sunday. pic.twitter.com/T5fRi00pSg

So tell me … you see that sign the way it looks now, and you want to go up Route 9 and pull into the parking lot and get your tickets (and your extra tickets for a good report card) and get on the Kidney Buster roller coaster again, don’tcha?

Even if I wanted to enter this in Altamont, they’ve been very clear that they no longer want electrified artworks from me – or anything that would require a power plug.  Okay, I get the hint … 🙂

And I’m not schlepping this creation to Durham.  And there’s no category at the Big E for it.  And the New York State Fair’s submission deadline was a few weeks ago.

But … let’s say down the road in November … I know of one art show that I have a feeling will go completely wowie-zowie over this.

In other words … I’m thinking this artwork might just be taylor-built for that show.

2 replies to One more return to Hoffman’s Playland