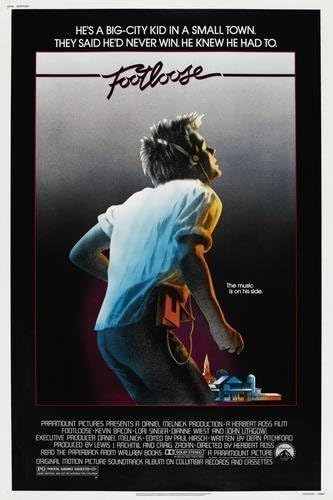 Yes, I know I’ve never seen Footloose. It came out in the early 1980’s, and I never honestly had a chance or a desire to see it.  Yeah, I heard all the songs from the movie on my radio, and I saw the music video with clips of the film all the time on MTV.

So when I heard that Footloose would be the second film of a double feature at the Jericho Drive-In last night, I figured 30+ years was long enough for me to finally get around to seeing it … and including it as a film on the Royale with Cheese Movie Club, the blog category about films that EVERYONE in the world has seen … except for me.

First off, I sat through two hours of Grease.  And I could sit through six more hours of that film, it’s just great.  Plus, I had a cheeseburger and some cheese fries and a diet cola … yum … and some ice cream at the Jericho’s Twist ice cream parlor … yum yum…

Okay, then Footloose came on.  Lots of dancing feet.  Kid from the wrong side of the tracks (Kevin Bacon) arrives in smalltown USA, where dancing and rock music is outlawed by a fire-and-brimstone minister, whose daughter is trying to find new ways to stare death in the face.  Oh yeah, and there’s some subplots involving a chicken race with tractors, teaching a big beefydork kid how to dance, and lots of other things.

But I’m sitting through this film, and it seems I’m picking up on a certain vibe about Kevin Bacon’s character Ren.  Ren comes to this small town, he immediately gets a job, he catches the attention of the preacher’s daughter, he helps the preacher’s daughter get over her survivor’s guilt (preacher’s daughter’s brother was involved in some deadly car crash some years prior).  Ren also stops a guy from beating up on Ren’s friends, he convinces the preacher that it’s okay to have kids dance … essentially, everything Ren does or touches or says changes a bad situation into something uplifting and healing and positive.

And by the time the movie ended, it completely dawned on me.

A “Mary Sue,” for those of you who don’t speak nerd-cabulary, is a character who never gets defeated, who befriends all and heals all and vanquishes the bad guys and brings us all a happy ending.  The original “Mary Sue” was a character in a Star Trek fan fiction, in which someone name “Mary Sue” interacts with the crew, solves a major crisis, and earns the crew’s undying love and adulation, no matter what situation arose.

Normally, a “Mary Sue” is a female character, but I just sat through Footloose and I think Kevin Bacon’s character may be the first male Mary Sue I’ve ever encountered on film.  Wowie.

Would I see it again?  Probably not.  I felt like I had watched a two-hour MTV music video with one-dimensional stock characters and more happy endings than in a massage parlor.

But at least I can say that I’ve added Footloose to the Royale with Cheese Movie Club.

Now I gotta find my next film for the club … hmm … Fatal Attraction … Alien … any of the Harry Potter movies ….

Well, we’ll see if any of those show up on the drive-in screens.  At least I can balance out a film like Footloose with some tasty food at the concession stand, amirite?