I don’t think I’ve ever created a Dream Window in a 24-hour period.  Ever.

Last weekend, I took some star-trail pictures at Brown Tract Pond in the Adirondacks.  During my three-hour time interval, a flashlight-carrying person must have walked by my camera in the middle of the night, probably on his or her way to the park lavatory, I suppose.  The flashlight caused one of the exposures to illuminate the trees.

So I worked with that.  Starting with that exposure – photo 8848 – I took the next 100 photos in the exposure stream, and used a formual in startrails.de called “falling stars.”  The “falling stars” exposure caused the star trails to expose to a point.  Absolutely breathtaking.  Here’s what the exposure looks like. 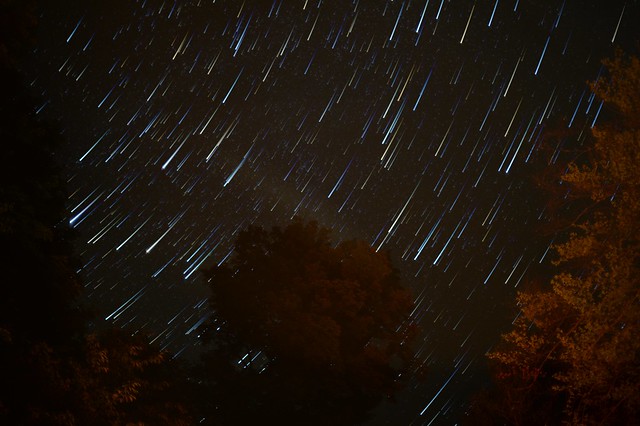 Yeah, I can work with this.

Most times when I build a Dream Window, I’m picking the window first and creating the artwork based on the window.  This time, I’ve got the artwork, and I need to find a window to work with it.

I had several window frames I hadn’t previously used.  And lo and behold… I found one that would work.  It was a simple four-panel window, it had no stained glass perimeter or curved wood paneling or anything like that.  And after doing a little “window-bashing,” I came up with this egalitarian frame.

Not bad.  At the same time I went through the “window-bashing” stage, I sent the prints off to FedEx Office on Wolf Road, with specific strict instructions on sizing and printout quality.  Then I went to Lowe’s and asked for four panes of glass, 6 3/4 by 17 1/4 apiece.

“Yes, they are.  Are you picking them up later this morning, sir?”

I brought the prints back to the Town and Village.  Four panes of glass.  Four prints.  A window-bashed frame.

I hung Dream Window 12 on the wall.

Oh yeah, and I took a picture of it for all of you to see.

So here’s what I imagined for this Dream Window.  It’s late at night.  You’re half-awake, half-asleep, halfway between insomnia and slumberland.  And the stars drift by like falling dreams, wishes granted from above, dropped down to land in a million hearts.

It’s a combination of inspiration and contemplation.

And yeah, it might not be the flashiest Dream Window out there…

But it’s definitely the most introspective.