Please let me tell you a story today.  A story about a man named Orest.

I first met Orest ten years ago.  At the time, I was freelancing for a minor league sports website which paid its writers on promises and not much else.  At the time, Orest was the general manager of the Rochester RazorSharks, a first-year basketball team in a ragtag circuit called the American Basketball Association.  I was at a Sharks game to write an article about the team, who were setting attendance and scoring records in a leauge where the quality of play ranged from top-notch to barely afloat.  In fact, the team Rochester was playing that afternoon, the Montreal Matrix, arrived at Blue Cross Arena in a minivan with only five players, a coach and a photographer.  Yet Orest welcomed the team in, and several thousand fans watched the Sharks win another game. 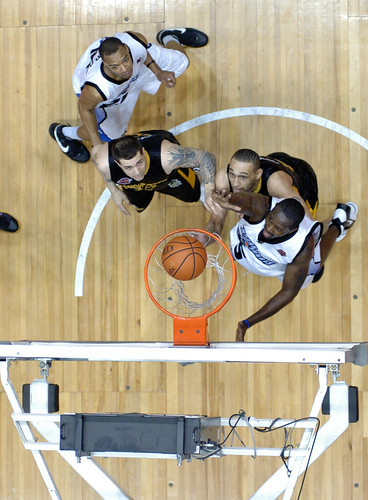 //embedr.flickr.com/assets/client-code.jsWe now move forward to 2008.  The Sharks have moved to the Premier Basketball League, a higher-caliber independent league.  I’m working with the PBL as a photographer and statistician, and I had an idea for a swank photo.  Orest helped me arrange to photograph the action from the ceiling of Blue Cross Arena, my camera pointing down from the rafters (and me hanging from the rafters, figuratively from the tips of my toenails) to get a shot of Rochester’s Sammy Monroe and James “Mook” Reaves battling under the basket with the Manchester Millrats’ Marlowe Currie and Sam Carey.  The photo, which I later called “Action Under the Basket,” won me my first-ever photography competition ribbon.

Orest Hrynwak loved the Rochester RazorSharks.  It ws a childhood dream for he and his brother Severko to own a professional sports team in their hometown of Rochester, New York.  And once they owned the team, they helped build it into a minor league hoops powerhouse, with six professional championships spanning two leagues in the past decade.

Orest Hrynwak loved rock and roll.  Prior to his involvement with the Sharks, he was a program director and general manager for a Rochester rock radio station.  He used the broadcast name of “Captain Cash,” and if you had a radio station bumper sticker on your car, he would drive by, pull you over, and hand you money on the spot.  His Facebook page featured dozens of “Throwback Thursday” photos of him with several local and national bands and singers of the 1970’s and 1980’s.  In fact, in 2010 he used his connections to have Foreigner lead singer (and Rochester native) Lou Gramm sing the national anthem at a RazorSharks game.  Lots of fun.

Orest Hrynwak loved his family, and he doted on his beloved mother.  Every time I came to a Sharks game, there was his mother and his brother Roman, both sitting in prestige “Jack Nicholson” seats, to watch the RazorSharks play (and win) another match.

Orest Hrynwak loved his Ukrainian heritage.  He participated in several fundraisers for the local Rochester Ukrainian church, St. Jehosophat’s, and his pride of being a Ukranian-American showed through every single time.

Orest Hrynwak recently suffered from heart issues, and underwent bypass surgery a few months ago.  The surgery was successful, but even in that success Orest knew that every moment after that hospital stay was as precious and as fleeting as ever.  For no matter how long one holds back death, there will come a moment when the black chariot arrives, and the chauffeur says, wryly, “You’re ride’s here.”

This morning, I received terrible news.

The chauffeur arrived for Orest Hrynwak, and the chariot had a 98 PXY bumper sticker.  Orest was only 59.

Orest lived every moment with joy and excitement.  He cheered when his Sharks won game after game and championship after championship.  He was an icon and a stalwart of Rochester rock and roll music, both local and international.  And he will be missed.

God bless you, Orest, and thanks for everything you’ve done and every life you’ve brightened.

Now go and show that rock and roll hallelujah chorus up in the next world how to promote the concert for the ages.

2 replies to Orest Hrynwak: An elegy for Captain Cash