After I completed my first-ever milk crate upcycling project, Hi Norman’s Kill Dairy, the results were impressive – but also impressive were leftover chunks of lumber from the remnants of the original milk crate. 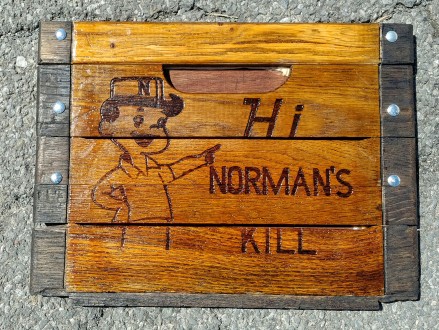 For reference, here’s the original art piece.  And it does look kinda swank, if you ask me.

But if I ever entered this in some sort of competition, either as recycled art or as a representation of Albany’s cultural past … how well would this work?  I mean, to someone who hasn’t perused my blog before, they might see this and surmise that I simply carved the side of a milk crate off its frame.  And how many people outside of the Albany-Schenectady-Troy area would understand that a “kill” is a Dutch word for stream, and that Norman hasn’t killed anybody – in other words, this didn’t come from the Bates Motel Dairy, people…

But getting back to my original leftover chunks of lumber … here’s what I still had left from the crate. 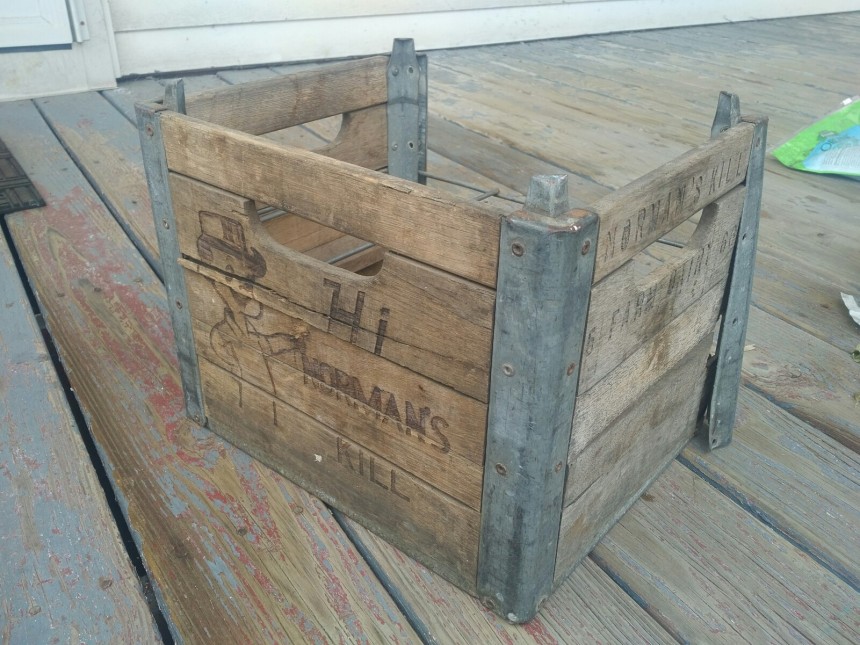 Leftover scraps.  Honestly, my original options with the leftover scraps involved either kindling or whittling.  Now if I could just find that Boy Scout knife from my days of “totin’ chip” in Scouting …

Nah.  I have a better idea.  If I can pull the remaining slats out of the milk crate frame … maybe I can create something cool out of this.

As before, I took a cold chisel and gouged out the metal rivet heads along the milk crate frame.

It took an average of fifteen to twenty-five strikes to knock the rivet heads off.  Then I used a thin metal punch to pop the rivets out of each point.

With as much care as I could possibly muster, I pulled the remaining fifteen slats out of the metal milk crate frame.

And when I was finished … this came out.

Awesome.  I saved the sides, as well as the other front panel.  One of the boards on the front panel is cracked; I’ll have to bind that up with glue.

Another trip to Home Depot to rent a palm sander.  And on a misty wet Sunday morning, I sanded down the fifteen different planks and slats.  I started out with 120 grit sandpaper, then followed up with 220 grit sandpaper.

In fact, here’s a “before and after” picture showing the unsanded planks (at right) and the sanded ones (at left).

Last time, I didn’t stain the wood, choosing instead to apply an amber shellac coating.  Not this time.  This time I want the grain to shine on these pieces.

Here’s where I’m at. 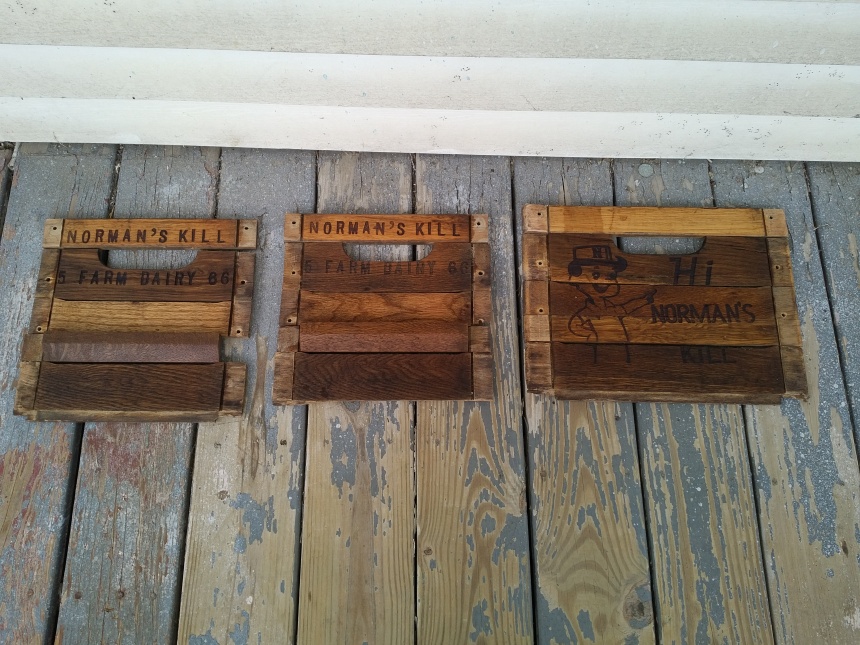 Even with the golden oak stain on the wood planks, some of the planks just looked too dark.  Man, if I could only enhance the advertisement carving on each of these planks…

I have an idea.

What if I took some sort of wood putty or wood filler … and forced it into the advertising carving?

A test.  I took one of the planks, and inserted some Minwax wood putty (formula 900 white) into one of the carvings.

Damn.  It worked.  So let’s continue forward with this idea.

It took a few hours to wedge the putty into the carved letters and numbers of the oak planks … and after spending the better part of an evening using wood putty to complete one plank, I went back to Home Depot and picked up some liquid wood filler – the kind that comes in a tube.  A few squirts into the letters and numbers, and I wiped away the excess with a straight-edged putty knife.  A little sanding with 80 grit sandpaper… and I got this.

Another interesting thing.  When this crate originally existed as a crate, there were two triangular-shaped slats that pointed inside the crate itself.  I suspect those slats were designed to keep the milk bottles from rattling about and banging against the actual sides of the crates.  Well, I decided to rotate those triangular slats outward … and repurpose them as tiny little shelves.  You know, as in “once this is hanging on a wall, you can put your knick knacks or tchochkes on the little shelves.”

Hey, waste not, want not…

Another trip to eBay, and I found a couple of vintage postcards that feature the Normanskill Creek.  How old are these postcards?  They suggest that the creek exists in the town of Kenwood.  Two eBay purchases later, I acquired the postcards.  Whee.

A quick trip to Hobby Lobby to acquire some custom-cut 5″x9″ mats, with opening large enough for the two postcards.  I then applied the postcards and the mats to the artwork – one card for each side of the piece.

When I was completely sure this piece would hold together longer than just a few seconds, I made one more trip to Hobby Lobby to properly wire the piece for hanging.

Feast your baby blues on this.

Oh my sweet Lord.   I took the leftovers from one project … and made an even stronger project from them.  Sweet and smooth.

Hey, if nothing else, I’ve got my first entry for BUILT 2017 hanging on the wall right now.  Sweet.  Swank.  Superlative.

That is … if I don’t enter it in some other competition prior to BUILT.