It’s 1980 and I’m living in a very toxic home life.  One of my few escapes was listening to the local top 40 radio stations.  And for some unexplained reason … the radio stations are playing a song that wasn’t on the national Top 40 charts.  It was a surf-rock track with a wicked drum beat and some waycool lyrics about surviving the work week and dreaming of a world where all you ever did was protect swimmers on the beach.

Yes, the local radio stations were playing a song called “I Wanna Be a Lifeguard.”  A song by an Albany, New York rock band.  Wait.  WFLY never plays local music.  Neither does WTRY or WPTR or 3WD.  What in the holy heck is going on?

And from that moment on … I was hooked on Blotto.

And when I scraped together some coinage, I purchased the debut EP “Hello! My Name is Blotto, What’s Yours?”  Yeah, I wore out the first side of that EP, mostly playing “I Wanna Be a Lifeguard” and “We Are the Nowtones,” the latter being their ode to cheezy lounge music.  I did give the B-side a few spins – but my teenage mind never understood that “Bud Is After Us” was a big fuck-off to their former manager, and I could have taken or left their disco version of “Stop! In the Name of Love.”

The minute their second EP, “Across and Down” hit the stores, though, I bought it as quickly as I possibly could.  And right off the bat, there’s Sarge talking about the dangers of lusting after a girl whose boyfriend lifts weights, builds cars, and has no sense of humor.

By the time I reached college and found a happy place at the college radio station WHCL, I had acquired Blotto’s latest track – a 7″ single called “When the Second Feature Starts,” which was actually produced by big-time rock producer Bob Clearmountain.  Heck, did this mean that Blotto was on their way to the big time??  Please?  Pretty please with a batch of zinc oxide on our noses?

And if this wasn’t strong enough to bring Blotto to the masses, that nascent music video television channel MTV had no problem playing Blotto’s early music video “I Wanna Be a Lifeguard,” as well as their follow-ups “Metal Head” and “I Quit.”  In fact, here are all three music videos for your enjoyment.

And here’s “I Quit,” which was actually released as its own 45 on a major record label in Canada.

The crazy thing is … this isn’t just a blog post about Blotto.  It’s about Greg Haymes.  See, when he wasn’t singing lead for Blotto, he was also a very proficient music writer and critic for the Times Union.  And on those occasions when I was promoting my newly-written record collector’s guide (way back in 2000, mind you), Sarge profiled my book in the TU’s entertainment section.  He also was very pleased to see that my copy of “Hello! My Name is Blotto, What’s Yours?” appeared in the book as a nod to regional collectible music.

He was also kind enough when, in 1997, he and several other members of Blotto helped me put together an article for the weekly newsmagazine The Source about Blotto’s history.  You can read the article on blotto.net, it’s still archived there.

Sarge was also one of the driving forces behind the entertainment news site Nippertown.com, and he fastidiously promoted every artist in every venue around the 518.  This is dedication, pure and simple.

Over the years, our paths crossed – I would cheer a Blotto performance at one location or another, whether it was at LarkFest or at a J.B. Scott’s reunion. 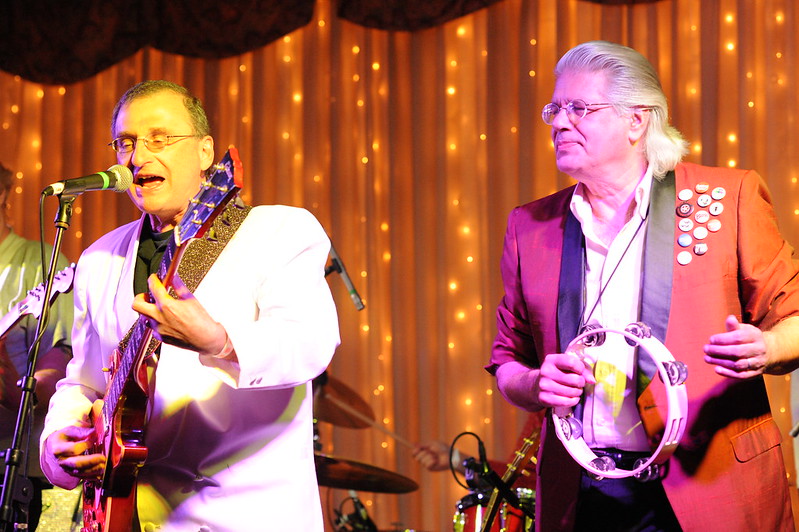 There’s Sarge on the right, banging the tambourine at the J.B. Scott’s reunion show a few years ago.  Bowtie Blotto is on the left.

I also remember that Greg was very attuned to charitable events and fundraising.  When the Mohawk Hudson Humane Society held their annual “Art Saves Animals” auctions, he would always attend, and he’d purchase an item or three – especially if it had something to do with the big Nipper mascot atop that old Broadway warehouse.

The last time I saw Greg Haymes / Sarge Blotto, he and Bowtie were attending the 2018 All Over Albany birthday party.  It was a great event, and he and Bowtie and I were eating pizza and sharing stories and having a great time.

The man lived his life full and strong.  He made friends along the way, and I don’t think I’ve ever known anyone to say anything cross or derogatory about him.

Last night, I received word that Greg had passed away from cancer.

No, this isn’t the time to be polite.

Rest in peace, Greg Haymes.  Thank you so much for everything you’ve done – every artist and band to whom your byline helped share their talent.  For every time I ran to the store to get a new Blotto album – or to get it in a new format.

If there’s anything at all that I hope in this moment, is that I hope that when you reach the next adventure, the first person who greets you is Keith Stephenson.

I’m sure the two of you have some great stories to swap and some serious catching up to do.

3 replies to Thank you Greg Haymes. And thank you Sarge Blotto.