These are record brushes.  They were used by electronics stores and audio stores to sweep dust and dirt from phonograph records.  They were branded for various companies, and then in turn they were stamped with the address and phone numbers of the local merchants.

There are clues to the age for these brushes – the phone numbers on these celluloid-topped brushes, for example, are five digits – which usually meant a local exchange of two letters, plus the five numbers.  In popular song, you might have heard of the Glenn Miller Orchestra’s “Pennsylvania 6-5000” or the Marvelettes’ “Beechwood 4-5789,” both of which use mnemonics to easily remember telephone numbers and exchanges.  I believe Albany had “HObart” for their exchange, but I’m not completely confident on this.

And these are RCA Victor-branded products, because the record brushes tout Records, Victrolas* and Radios.  This is not unusual.  RCA Victor didn’t make “record players,” they made “Victrolas,” and don’t you forget it.  It’s brand recognition.  They were not just “record players,” like you could find in any record store. It’s like today, when someone uses the phrase “iPhone” for their personal cellular telephone.

That being said, The Spector Pharmacy existed on 279 New Scotland Avenue, next door to what is now known as The Cuttery and Graney’s Bar and Grill.  You might know it as the address for the Sake Cafe restaurant.

Thanks to the good people at Flickr’s AlbanyGroup Archive, a history and repository of Albany-based images, here’s a 1938 newspaper advertisement for Spector Pharmacy. 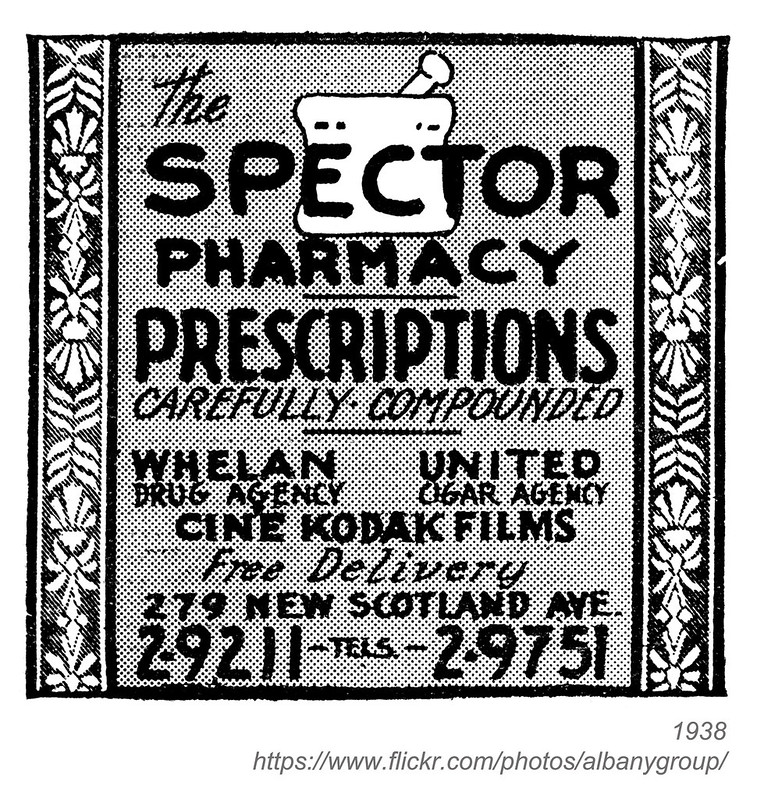 Silver Appliance is just two doors down, at 283 New Scotland Avenue, and is in a building that currently hosts The Fountain, a popular Albany pizzeria/eatery/jazz club.

But now comes the bigger question.  Now that I have these things … what in the name of His Master’s Voice should I do with them?

Honestly, I think I acquired these treasures years ago.  Maybe ten years ago, back when I was living in Pine Hills and married and whatnot.  And then, after the divorce, I probably put these record brushes in a box, packed them away, moved to Green Island, and completely forgot about them until I found them yesterday.

I thought about whether I should incorporate them into an artwork – maybe a Nipperie collage with images from Nipper and “His Master’s Voice” and RCA Victor and whatnot.

I’ll box these little guys up and send them over to the Albany Institute of History and Art.  I’ve dropped off other Albany treasures in the past, so why not add these two little guys to the mix?

Honestly, there may come a time – and I know it could be tomorrow or 25 years from now – that I won’t be here to enjoy all these artifacts.

Best that someone else can enjoy them before someone else thinks, “Ah, two old brushes, toss them in the trash, nobody wants them.”