Well, I wasn’t about to drive to Des Moines and back … but I did have some inside spies fill me in on the details.

And those “inside spies” were J. Eric Smith and his family.  Like me, J. Eric Smith used to write for a certain Albany-based newspaper, until they did him dirty and he walked away.  In case you’re wondering, this is a common thread with Big Hearst “doing dirty” to their community bloggers, treating them with the same disdain as one would treat an electricity bill.

But be that as it may, J. Eric moved to – of all places – Des Moines.  He lived there for a few years, and is now located elsewhere in the Midwest.

And although he couldn’t visit the Iowa State Fair … he did send some of the Smith kin to check out the results AND to provide me with photos.

Marcia, John and Katelin found two of your photos in the Iowa State Fair Photo Salon. You got a third prize ribbon in the “What’s Up” gallery, and your infrared tree is also on display. Marcia got you a copy of the exhibition book. We won’t both be back in Chicago until the middle of next week, but when we are both here and I can get it from you, I will get it mailed to you. Let me know your snail mail address!

Congrats!! Wish I could have gotten to Des Moines this week to see it myself, but glad to help orchestrate a sighting, at least! 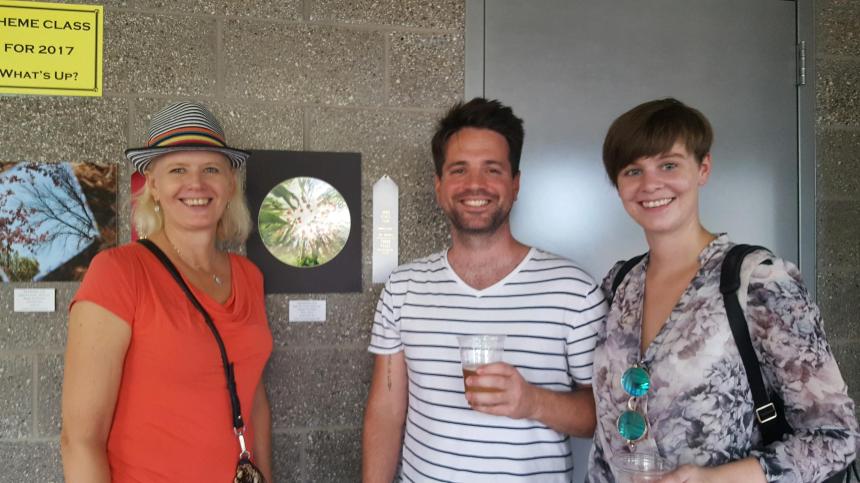 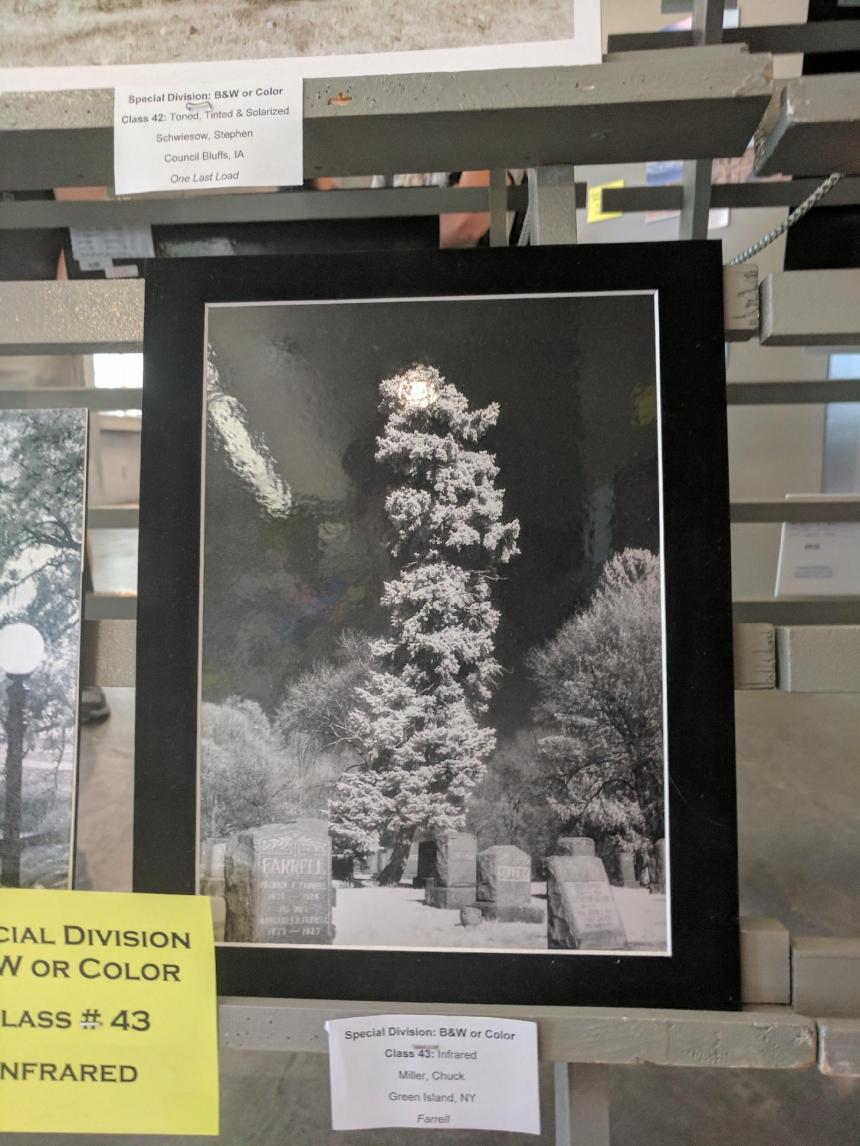 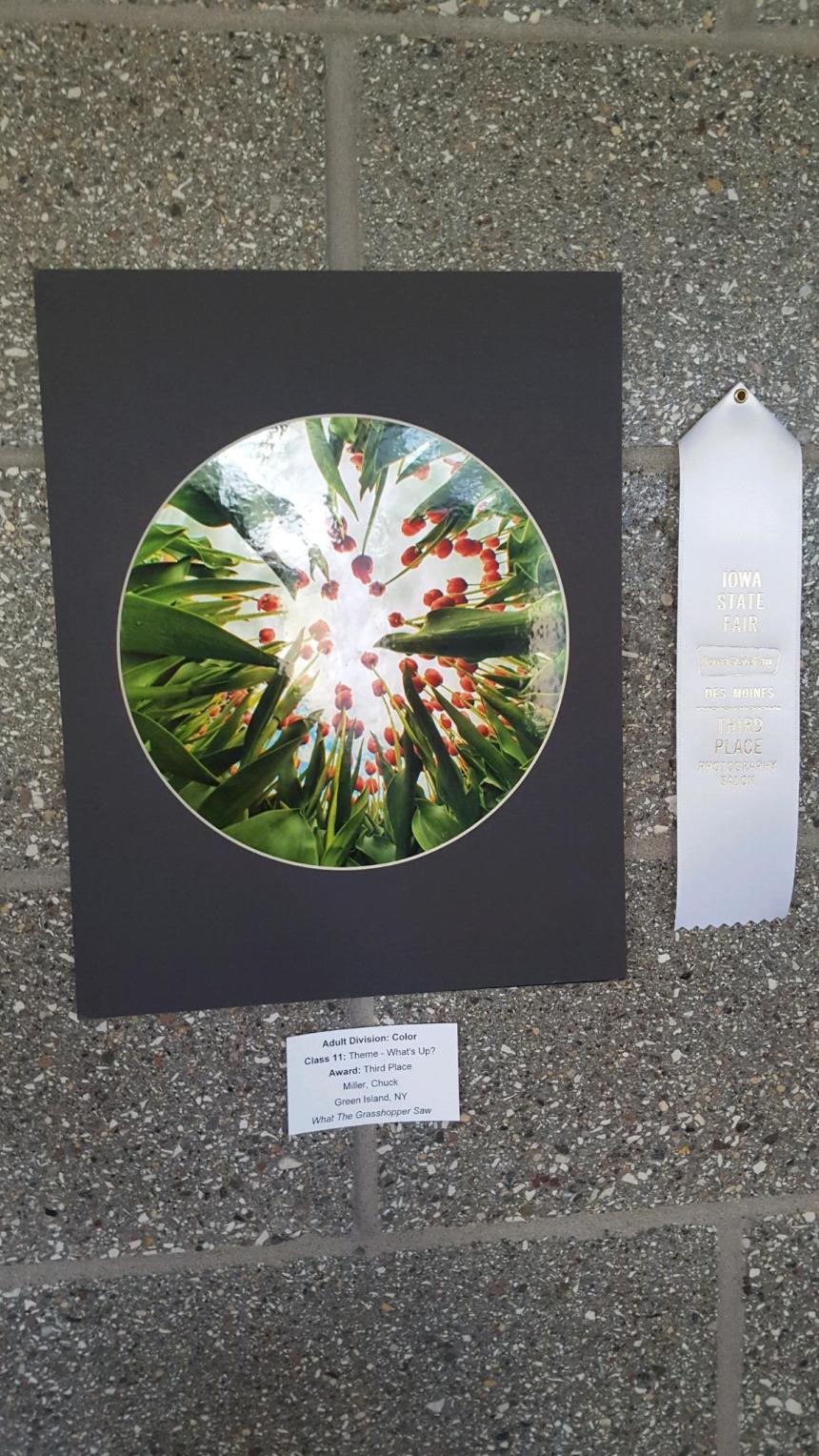 And lo and behold, there’s my results!

Farrell picked up an appearance on the wall – this, combined with the blue ribbon it claimed at Altamont this year, now makes what I thought was a last-minute tossaway image into the frontrunner for silk stardom for 2017!  And to top things off … between the two appearances, Farrell is my first-ever award-winning photo that was taken with my sainted Leica M3, also known as “Leica Green.”  Oh yeah, and my first B&W infrared shot to grace the walls since – oh, I don’t know – Parabola: From Hadley to Corinth a couple of years ago… or maybe Aerochrome Falls at Altamont…

And look at that super-swank little white ribbon next to What the Grasshopper Saw … claiming not only third place in its category, but THIRD PLACE in the “WHAT’S UP” THEME CATEGORY!

My first-ever ribbon at Iowa … how sweet is this … not only that, it’s another win for the Nikon Df camera, and my first-ever silk for a photo generated with the Kenko 180° lens attachment!!  Jeez, it only took me what, eight, nine years of owning that lens attachment before I actually did something smooth with it?

After a slow start … Competition Season 2017 is on the move!

Much thanks to J. Eric Smith and his family for taking the time to visit the Iowa State Fair and to photograph my successful entries.  Totally appreciated.

This is now getting very very interesting. 😀

2 replies to Results from the 2017 Iowa State Fair