For all the years I’ve owned a camera, I’ve tried to photograph the spectacular fireworks show at the Empire State Plaza.  I’ve dealt with oppressive heat, poor shooting angles, and people bumping into my gear in the middle of the fireworks show.

This year, I wanted to avoid all that.

I knew that Price Chopper had a special viewing area at the New York State Museum, so if I could get access to that shooting area, I would have some super swank photos for my efforts.

But … that’s a secured area.  You just can’t walk in, set up your gear and start shooting at the fireworks.

So I made a call to the Price Chopper corporate offices.  And after turning on my charm and negotiating skills …

They put me in touch with the New York State Office of General Services, who oversee the operations at the Empire State Plaza during the fireworks show.

And after I used more of a charm offensive with OGS…

Everything was set up.  I could access the rooftop gallery and capture the fireworks with the best angle and without any complications.

Years of Empire State Plaza fireworks photography has taught me many things – get your parking early so that you can exit the Plaza with a minimum of delay; make sure you have a fully charged phone and that your camera batteries are fresh, and that your camera chip is clean and able to handle lots of photos.

Because, let’s face it – when you’re on the grounds with 7,000 other people, it’s kinda hard to make any last minute adjustments.

When I arrived at the Plaza, I met with the OGS coordinator.  She handed me a special media access badge, and told me that there was a special location at the New York State Museum specifically designated for my shooting access.

She gave me this badge.

Okay, now it’s time to check out some of the performers.  Local rock singer Moriah Formica brought along a rock band for her show, and she performed a mixture of covers and original tracks.  Decent enough, and some of her originals were worth listening to, if you can get past her leaning on Evanescence-like song concepts.  But then again, that’s me.

After she finished her show, I dragged my gear to the Museum shooting location.  A security guard saw my badge, and immediately directed me to the private shooting spot.  It was a walled-in area just to the left of the Price Chopper dining party.  I had a clear shot at the three main buildings for my photography experience – the Egg, the Corning Tower and the Capitol.

In fact, here’s a shot of my shooting locale. 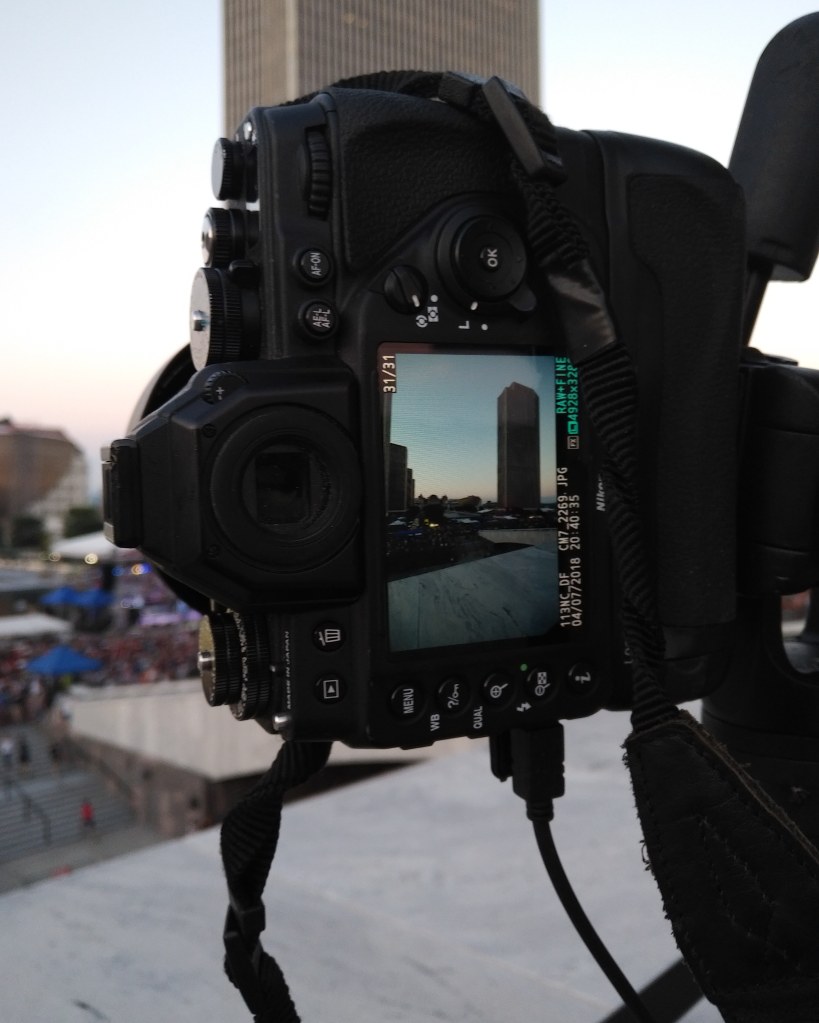 Okay, now it’s time to listen to Smash Mouth, with the fireworks scheduled for 9:15 p.m.

Again, Smash Mouth was better than I expected, and they saved “All Star” for an encore.

But just as Smash Mouth ended their final notes …

Now “unprepared Chuck” would be scrambling right now to set up his gear and fiddle with camera adjustments.

In all the years you’ve read my blog, have you ever seen “unprepared Chuck” here?

Yeah, you know it.  One quick removal of the camera lens cap, and my Nikon Df was in action.

And here’s how the shooting went. 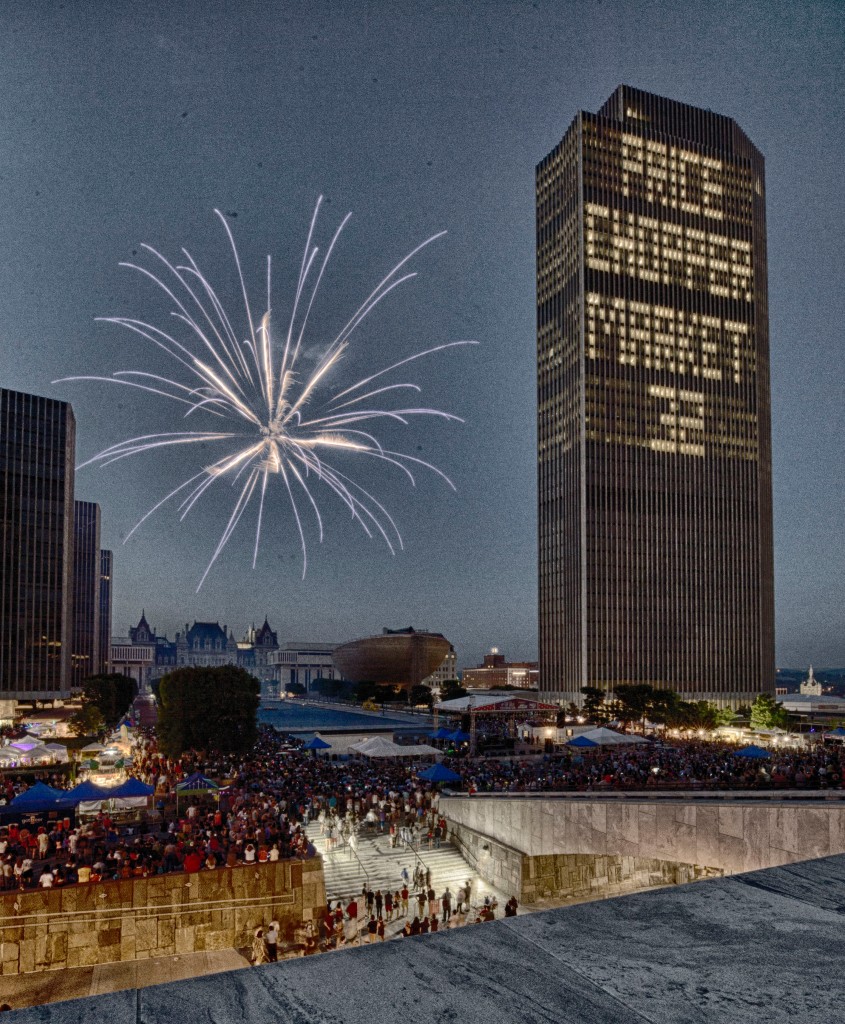 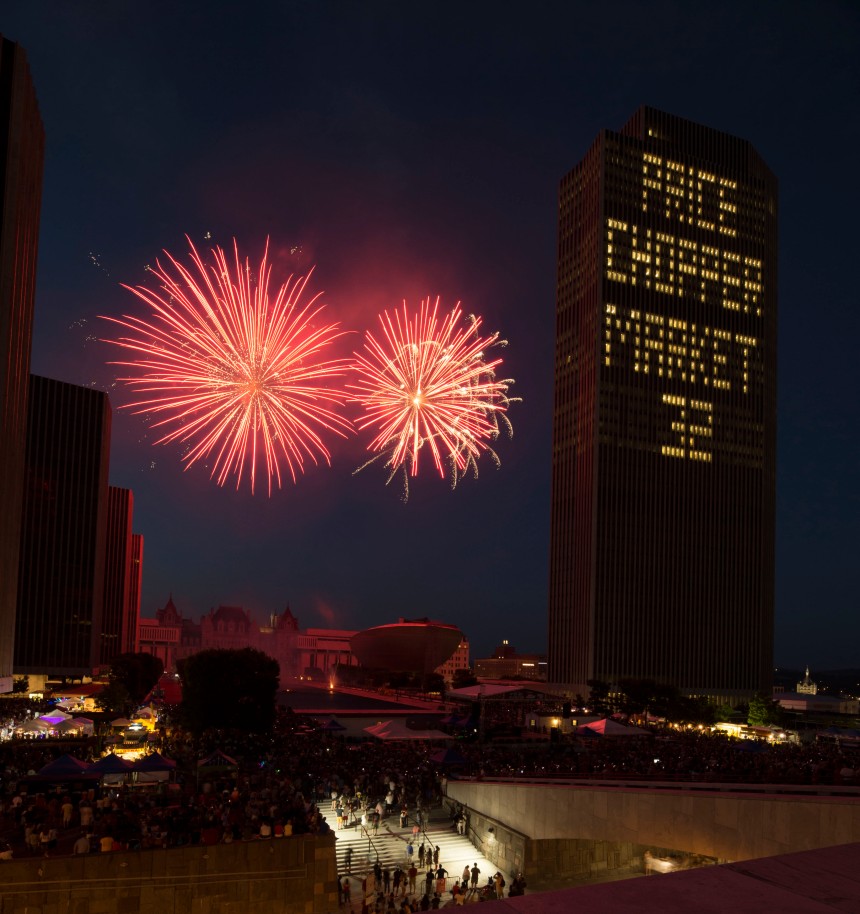 Hey Miller … while you’re at it, do you think you can get some super-slow-mo fireworks shots from the BlackBerry KEYone?

Let’s see what I get.

Okay, memo to self.  Don’t use a camera phone to photograph fireworks, especially when the camera phone keeps trying to autofocus on the fireworks streaks.

No matter.  Let’s go back to my regular camera gear. 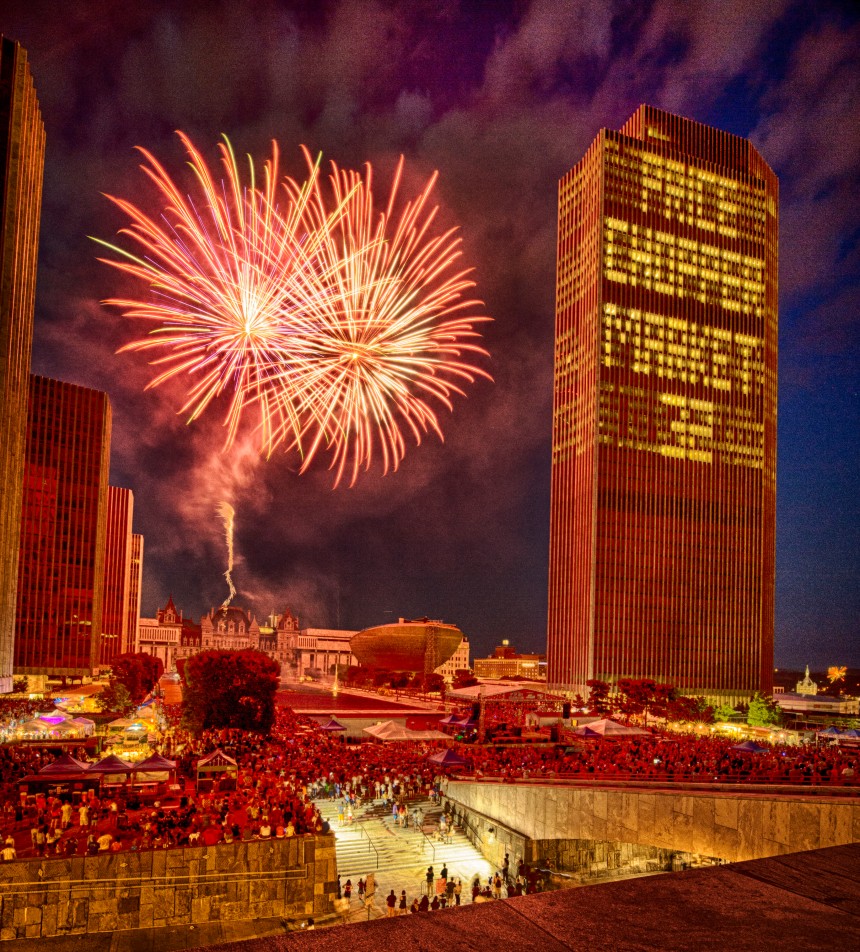 As you can tell, by now I’m just having fun with my Google Nik software and testing out different filters and effects.  But yeah, this worked out better than I expected.

The fireworks were all synched up to music, so I knew that when Ray Charles’ “America the Beautiful” played, I would get a warning that the finale was on its way.

Sure enough, “Stars and Stripes Forever” blasted through the speakers, and all the remaining shells were launched.

And then it was over.

Now comes the next adventure.

Escape from the Empire State Plaza.  Because now everyone’s surging towards the exits.

I left the Plaza parking lot around 10:30.  That’s actually better than I normally achieve.

All in all, it was an amazing night.  Much thanks to Price Chopper, the Golub Corporation, and the New York State Office of General Services for providing me with this once-in-a-lifetime opportunity to get the best fireworks photos.

Yeah.  This is good.