I’ve written in the past about Albany’s Civil War store coinage, where merchants made their own currency when the national coinage was limited.  In sort – Albany (and many Union cities) ran short of common currency, which forced store owners and businesses to offer customized tokens and scrip for consumers.  This coinage lasted from 1863 to 1864, when the U.S. Government forbade the minting of private currency.  Today, these Civil War “storecardsa” or “copperheads” are quite collectable, and there are at least a dozen different Albany merchants who produced their own tokens.

One of the more common Civil War tokens is a minting from Benjamin and Herrick, an early grocery and fruit dealer on 427 Broadway in Albany.  There are several variations on their token, but most of the mintings have their name on the front of the coin, and their address on the reverse.

There is one variation on this token, however, and it’s quite rare.  And I’m lucky to have acquired a copy of it for my collection. 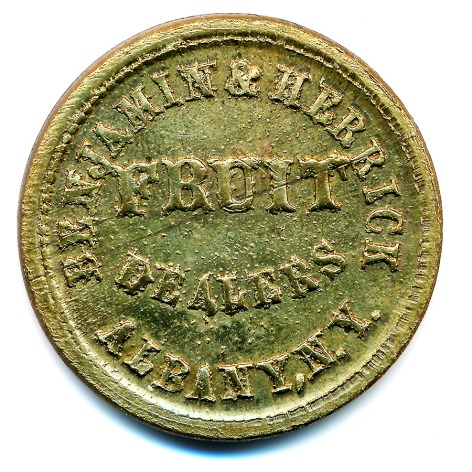 Lucky … or maybe I got a bad bargain.

Thisis the coin I acquired.  It looks kinda worn but still has a nice shine to it.  And you can make out the letters without too much trouble.

On the back of the coin – is the variation.

Instead of the store’s address, the coin’s reverse has some bound fasces of wheat, with the word “United We Stand Divided We Fall” around the coin’s perimeter. 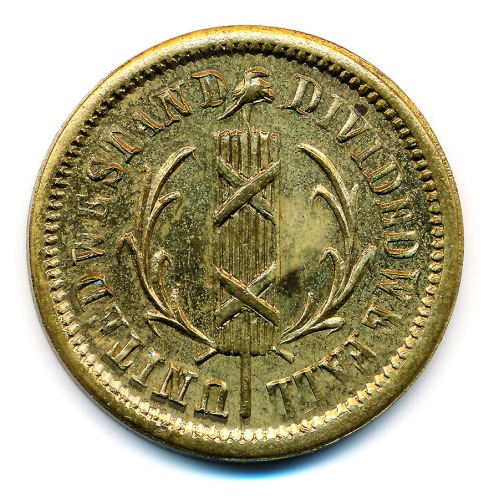 This is awesome.  Normally a coin like this costs a small mortgage payment, and I got it for a decent price.

Or was the price decent?

See, here’s the thing about coin collecters – numismatists, to be more precise – there are certain things you can do to a coin that actually devalues it.

And one of them – believe it or not – is cleaning the coin.

A 150-year-old coin develops a patina, where oxidation and time change the bright, shiny coin into a darker, more subdued hue.  Some people, thinking that a shinier coin may in fact be worth much more than a duller coin, will take various abrasives and chemicals and brushes to their coins, hoping to clean them into brilliance.

What they’re actually doing is cleaning off that natural patina.

And it looks as if whoever cleaned this coin must have used Brillo. 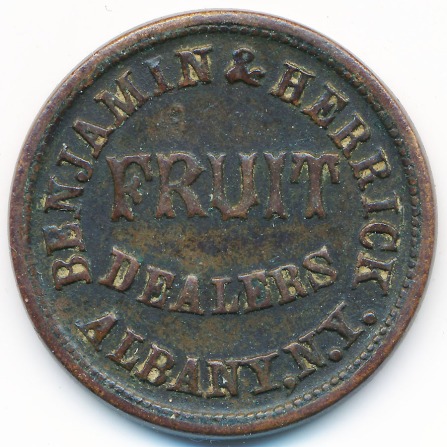 At right is an example of an uncleaned coin.  See the age and patina and wear on it?  This is what you would expect from a 150-year-old token.

And remember, these were not manufactured for the collector’s market.  Certainly not in 1863.

These copperheads were stamped quickly and cheaply – so quickly, in fact, that in some cases they would continue to manufacture the coin EVEN AFTER the stamping machine’s die fractured. 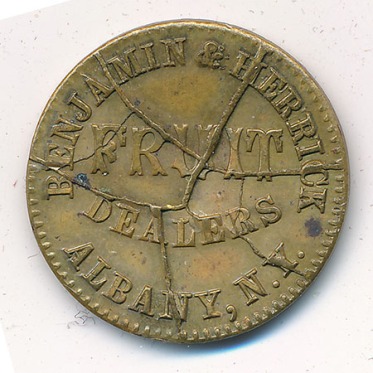 That being said … if I were to have my recent acquisition graded by a professional company – the kind that takes your coin and puts it in a protective plastic slab, and then adds definitive information about the coin’s information and provenance – and, in the case of exonumia like this, its Fuld number, a designation of what type of Civil War coin this is – the grading service might mark the coin as “Cleaned.”

Which is the same as saying that it was intentionally damaged.  Its value is diminished.

Sometimes, even today, there are Civil War coins found in the graveyards and battlefields of long-forgotten Civil War skirmishes.  In addition to uncovering bullets and badges and buttons and buckles and other bric-a-brac, excavators sometimes find Civil War coins and tokens – including those from both sides of the battle.  Those “dug” tokens are collectible in their own right, in that they show a direct provenance to a Civil War soldier who died on the battlefield.  You’re going to see corrosion and pitting and decay on those coins.  That’s expected.  And there’s collectors for those things.

But even those coins should not be cleaned.  You’re not only washing off all the coin’s history, you’re also putting marks on the coin itself.

So my latest addition to my Civil War token collection looks like someone did try to clean it.

I should be upset.

But I’m not.  For me, this coin is rare enough that I can accept it for what it is.  Ther eare very few Benjamin and Herrick “United We Stand Divided We Fall” storefronts out there.  And heck, after acquiring that one – plus the die-cracked one you see above – I’ve found the hard-to-acquire variations on this coin.  Technically, I could now go back and re-acquire the other coins manufactured by the company – all the printing variations and the like – and they won’t be as expensive.

As for coin protection – these coins look big in these scanned photos, but they’re honestly only penny size.  I went to a local coin shop and purchased some 19mm plastic coin holders,   I can place each Civil War token in its own plastic holder, and the coin is protected in a plastic and foam insert.

As I said, maybe someday I’ll get these coins professionally graded.

Or I’ll do what I did before, donate the coins to the Albany Institute of History and Art for their Albany history collection.  I’m okay with that, too.

And I promise I won’t clean these coins.

They’ve already been through at least one war in their lifetimes, right?