Yes, I know I’m going to step in it right now.

I do not care.

There are a set of movies debuting next year, both featuring the great superhero Captain Marvel.

But one of them wasn’t originally named Captain Marvel.

And the other one isn’t allowed to be called Captain Marvel any more.

Captain Marvel was one awesome dude.  He was originally a teenager, Billy Batson, who upon uttering the combination of the names of various Greek and Judeo-Christian legends – Solomon, Hercules, Achilles, Zeus, Atlas and Mercury – he became Captain Marvel.  The big red cheese you see above.

Captain Marvel was extremely popular – so much so, in fact, that he ended up with his own “Marvel Family,” including Mary Marvel (who also said “SHAZAM” to become a superhero) and Freddie Freeman (no, not the slugger from the Atlanta Braves) who became Captain Marvel, Jr. (he actually got his powers by saying “CAPTAIN MARVEL”).

They even made a vintage movie serial for the origin story.

But like all things popular, someone eventually has an issue with it.  So much so, in fact, that the comic book company that owned Superman sued Fawcett Comics, producer of the Captain Marvel series, for copyright infringement.  Eventually Captain Marvel was sued out of existence, and DC eventually bought the assets of Fawcett Publications.  So now, if they wanted to, Captain Marvel and the Marvel Family was theirs for the taking.

Except … the copyright on the name “Captain Marvel” lapsed. 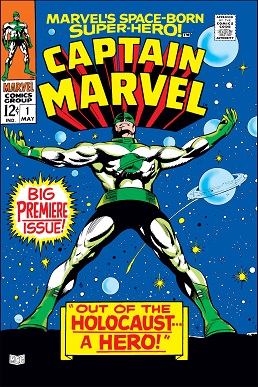 Enter Marvel Comics, sho quickly put together their own “Captain Marvel” character, a mighty Kree warrior with the somewhat convenient name of Mar-Vell.    So now Marvel Comics has this cosmic warrior in their superhero roster.

Meanwhile, DC’s trying to relaunch the recently acquired Captain Marvel, but … guess what … they can’t adverties THEIR comic book as Captain Marvel.  So thye call their magazine something like, “The Power of Shazam!” 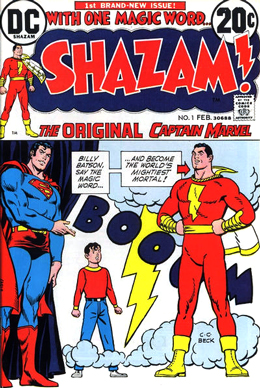 So… now you have two Captain Marvels flying around the superhero universe.  Yeah, it gets confusing.

And for a while, it was understood that the guy in the red tights was the first Captain Marvel, while the guy who flew through space in cosmic adventures was a – shall we say – second, unrelated Captain Marvel.

Then, in the mid-1970’s, there was a Captain Marvel live-action Saturday morning kid’s show on CBS – a show that, in and of itself, became the #1 kids’ show for that year.

Meanwhile, in the mid-1970’s, Marvel Comics released a new iteration of the Captain Marvel in their stable, with Carol Danvers as Ms. Marvel, a distaff superhero to continue their hold on the “Captain Marvel” trademark.

Now eventually, Marvel’s Ms. Marvel also became the name of other Marvel superheroes, including Kamala Khan (a teenage Pakistani-American with shapeshifting powers) and Monica Rambeau (who I believe was also called Captain Marvel, but again I’m getting confused like crazy here).   And the blonde superhero you see in the comic book to the left?  That’s Carol Danvers, who currently is now Captain Marvel (not Ms. Marvel).  That’s the character that’s in next year’s blockbuster movie.

But what about DC’s character?  Well, they’re now retconning it so that the Big Red Cheese is not called “Captain Marvel” any more.  He’s actually now known as the superhero Shazam.  And that’s the name of the sueprhero wit hhis OWN upcoming blockbuster movie.

At which point I have to say shenanigans.

Look, I get the fact that the name “Captain Marvel” is a highly contested name, that at one point it was used by different comic book companies for different superheroes.  I get it.  I totally get it.  So what happens now? This guy gets AND loses his powers by saying his own mae?  You ask him, “Wha’s your name?” “Hey, man, I’m Shazam. (lighting bolt) oh crap, now I’m a kid.  Oops.”

What can I say?  This is a big ugly mess.

But as far as I’m concerned, the guy with the lightning bolt on his uniform is Captain Marvel.  He was Captain Marvel first.  The woman can be Captain Marvel too, that Captain Marvel is in the MCU, while the guy in the red suit is in the DCEU.  It’s not like I’m expecting to see Wolverine show up to face Batman, or Wonder Woman battle Spiderman.  I understand the dichotomy.

Look, if you think that’s confusing … wait until 2020, when Warner Bros. releases two different movies based on the supervillain The Joker – with two different actors playing the clowned prince of crime.

Hey, I’ve watched 15 years of Spider-Man movies with three different actors in the web suit… if I can handle that, I can handle most anything else. 😀