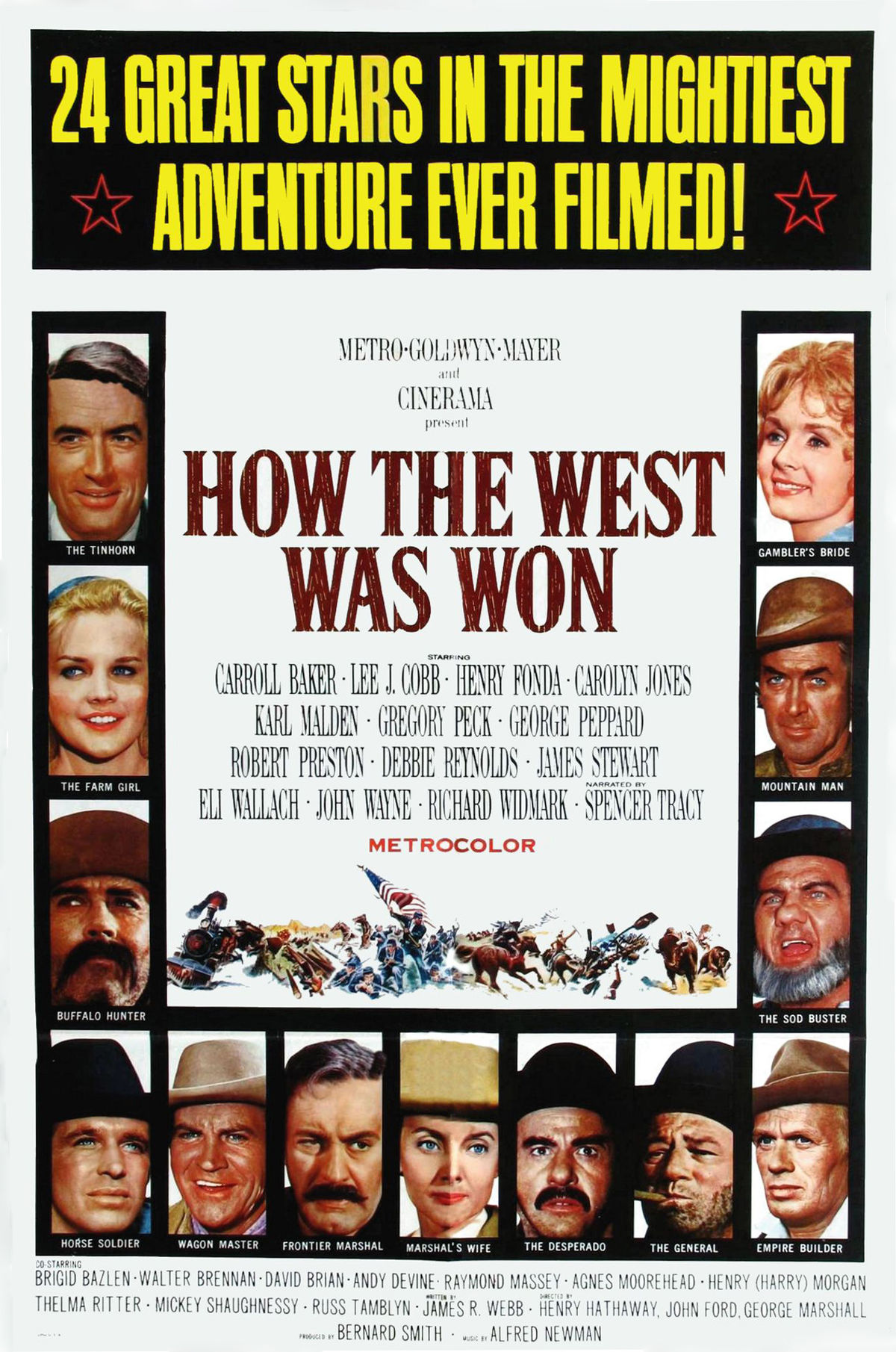 So it’s Saturday night, and I see that Turner Classic Movies is airing the 1962 sweeping epic How The West Was Won.

It’s been a while, but I figure it’s time to watch this film as part of the Royale With Cheese Movie Club.

The Royale With Cheese Movie Club, in case you’re joining the blog for the first time, is named after I finally got around to watching Pulp Fiction a few years ago – essentially, 20 years after everyone else watched it.  So I christened this part of my blog as a section where I watch and review movies that EVERYONE in the world has seen – and I finally got around to see them, years (or decades) later.

That list has included such films as The Princess Bride, The Big Lebowski, The Shawshank Redemption, Dirty Dancing, Frozen and a few others.  Yeah, and I hear you – “Chuck, for crying out loud, you haven’t seen The Big Lebowski?  What the hell’s wrong with you, man?”

You know, at some point I’ll get around to watching Fight Club and Fatal Attraction and a few others …

But right now, I’m blocking out three and a half hours of a sweeping Western epic.

How The West Was Won tells the story of the Prescott / Rawlings family, as they start the film traveling from the East to Ohio, while other members of the family move to California, and others travel to Arizona.  There are five full sections in this film, as the Prescotts and Rawlings move through history – the Civil War, the advance of the transcontinental railroad, the Gold Rush, all of it.  And it’s a film with plenty of acting talent – Henry Fonda, James Stewart, Debbie Reynolds, Gregory Peck, heck even John Wayne’s in this film.

There’s a great story here, and you an feel the sweep of history throughout the film.  You can also see all the usual filmed Western tropes of 1960’s cinema – savage Indians, bloodthirsty bandits, sultry dancing girls, the works.  It’s a great picture.  Definitely worth the three hours to see it.

But there’s one big problem with this film.  And I don’t know if it can be fixed in total.

Here’s the trailer to the film.

This picture was shot in the super-ultra-wide format Cinerama, which entailed three separate projectors onto a curved movie screen.  Think of it as the IMAX of its day.  On the big screen, it was absolutely stunning.  But crammed into a TV broadcast, the picture suffers from the limitations of converting Cinerama broadcasts to a flat image.

The trailer shows some of the limitations.  See the two vertical lines in the video?  Especially anywhere that there’s blue sky?  Yep.  That’s annoying.  Big time annoying.  And to make the characters look as if they were talking to each other while existing on a curved screen, the actors were actually facing off to an angle – which look rather garish when the picture is presented in a flat manner.  And the letterboxed widescreen crop actually shows TOO MUCH of the film, especially at the edges – during one of the scenes where the camera is flying through the current California landscape, you can actually see the landing gear of the filming helicopter.

There has, in fact, been an effort by a digital film restoration company called Flicker Alley to present How The West Was Won in a “smile-boxed” format, allowing for more proper views along the film’s edges and reducing the parallax effect.  Here’s what they did with the trailer.

Yeah, looks a lot better.  They got rid of the distracting vertical lines.

Again, great film – but trying to compress the Cinerama effect into a standard television, even the high-definition screens of today, causes more problems than it solves.

But maybe we need to get a movie theater in Albany that can show ultra-widescreen films.  You know, maybe a modified IMAX setup.

I mean, maybe that’s the best way to view a film like this.  Right?