Some time ago, I chronicled, step by step, how I took an old, beat-up drive-in speaker and turned it into a beautiful, Bluetooth-enabled speaker.  Yeah, I can do things like that.

So I tried again.  Only this time, I had a specific purpose in mind.

This is a vintage Simplex speaker.  In addition to drive-in speakers, Simplex also makes fire alarms and motion detectors.  As for this unit … the eBay seller told me it was “just like new, vintage.”  Yeah, I can spot a bullshit artist from a mile away, but the unit was cheap and the exterior wasn’t that bad.

When I acquired the unit … ugh.  The potentiometer volume control was stuck at one volume.  The back hook had some sort of adhesive on it, almost as if someone jammed a wad of gum on the hook in 1972 and nobody cleaned it off. 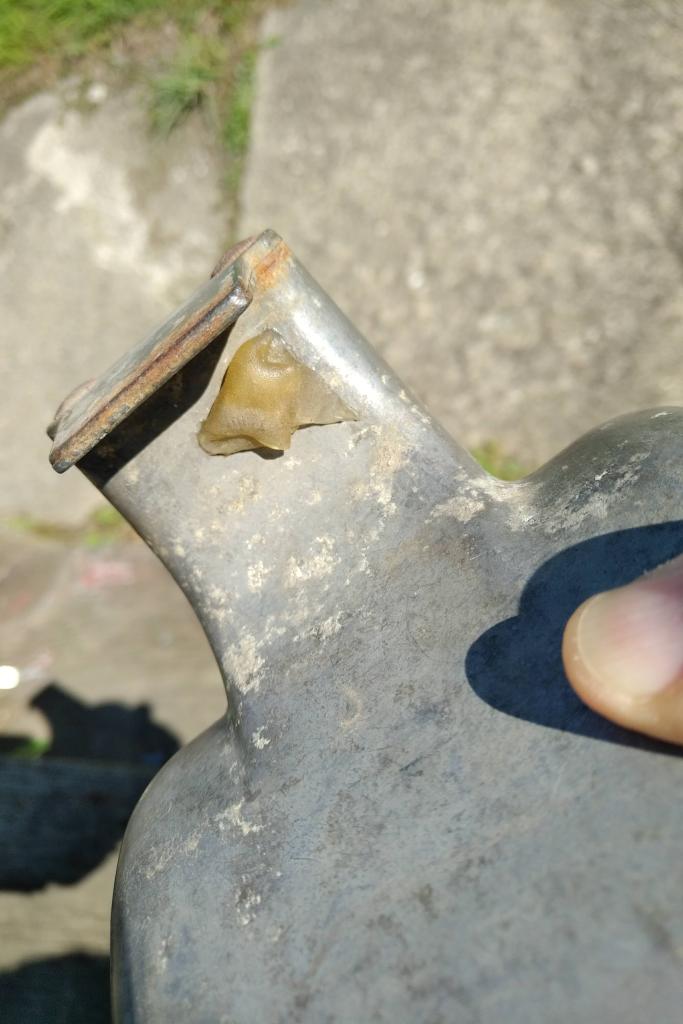 No, I ain’t chewing that.  I’m not THAT worried about my breath.

There was so much dirt and sand inside, the unit’s last films must have been a Lawrence of Arabia / The Ten Commandments double feature.

Yikes.  This is a speaker that’s definitely designed for silent films. 🙂

I can restore the exterior, but the interior guts of this unit … total replacement.  I’m not horsing around.

Okay, old potentiometer has to go.  Where’s my half-inch wrench?

And here’s what it looked like when I finally extracted the potentiometer.

Yeah, I ain’t fighting with this.  Go bye-bye.

While I waited for my Detroit Diecast replacement guts to arrive, I started repainting the chassis.  First, I washed the front and back chassis pieces with Simple Green, then soaked both sections in a mixture of pine cleaner and water.  I sanded down as much as I could, then applied a coating of self-etching primer to the chassis.  Since the chassis is made of solid aluminum, this would be the only way to make spray-can paint adhere to the unit.

I want the front of the unit to have a two-tone appearance.  So after I sprayed the chassis with the self-etching primer, and after the primer had finally dried, I masked off the front part of the grille. 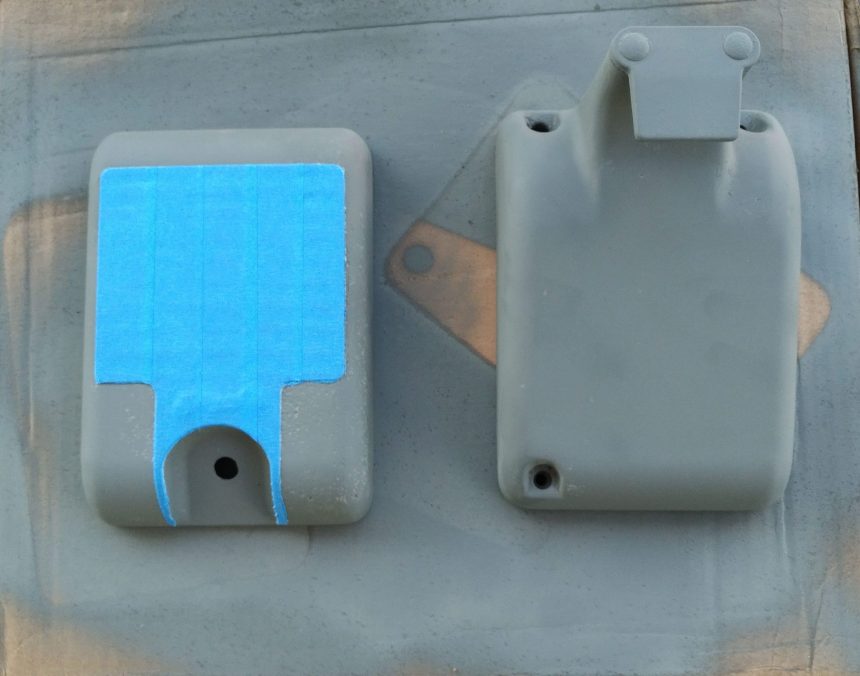 The first coat of rattle-can spray paint came from this can. 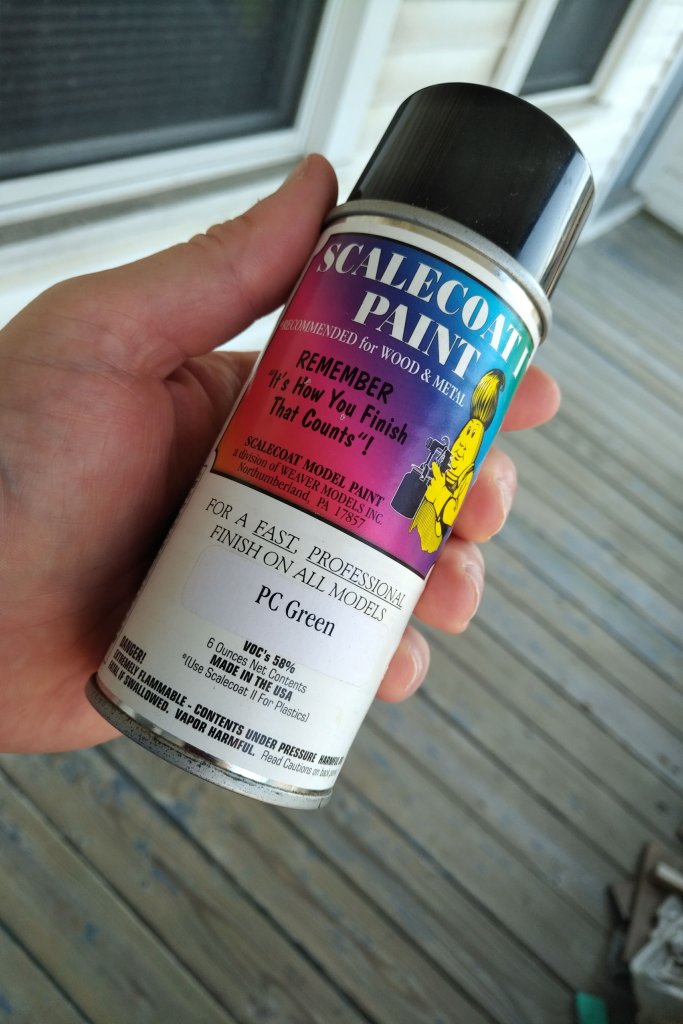 And before anyone gets their pearls in a clutch, “PC Green” does not mean “politically correct green.”  This is actually a color combination that model railroaders use for detailing boxcars and rolling stock of the Penn Central Railroad, which operated from 1968 to 1976.  I picked this color up at a model train show, and really never had a good place to use it. 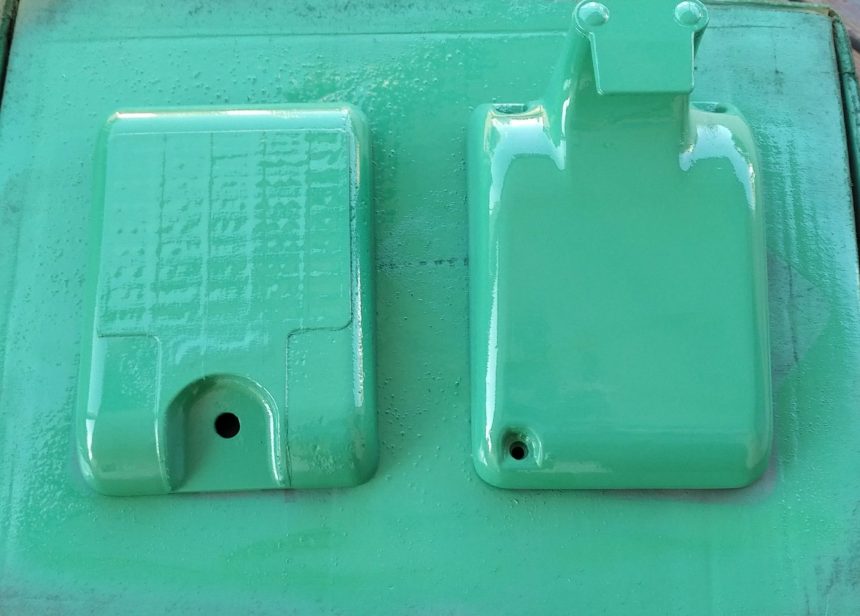 Once that completely dries – I’ll give it 24 hours – I can peel off the painter’s tape over the grille and place new painter’s tape around the unit that ISN’T part of the grille.  I still have some seafoam spraypaint from my last project, and I figure that seafoam and PC Green will look nice together.  I hope.

And since there is still a possibility of Historic Albany Foundation’s BUILT charitable auction happening, I wanted to make a special Capital District-themed drive-in speaker.

So what would make it a Capital District-themed drive-in speaker?

Well, the Mohawk was a popular drive-in on Central Avenue, just between Albany and Schenectady (technically it was located at “Stop 21” in public transit lingo, back when Central Avenue was Albany-Schenectady Road).  It debuted in 1946, with its first exhibition being The Spanish Main, with Paul Henreid and Maureen O’Hara.

I believe it had its final season in 1986, with its last films being a double-feature of the Sean Penn / Madonna flop Shanghai Surprise, followed by the Goldie Hawn comedy Wildcats.  Today, the land where the Mohawk Drive-In exists is now a shopping center.

One of the most striking features of the Mohawk Drive-In was the back side of its screen, as motorists who drove up and down Central Avenue could see a gigantic archer against the screen wall.

I tell you, that archer looks like it could shoot an apple off someone’s head in the Colonie Center parking lot if the wind’s blowing just right. 😀

I found a copy of the photo, digitally boosted some of the color, cropped the archer down to a 1″ x 2″ size, created a second image of him so that he’s aiming to the right (you know, there might be a decent bull’s-eye at Duane’s Toyland on Stop 3 of Albany-Schenectady Road), printed the archer on adhesive stickers, and applied the stickers to the bottom of the chassis. 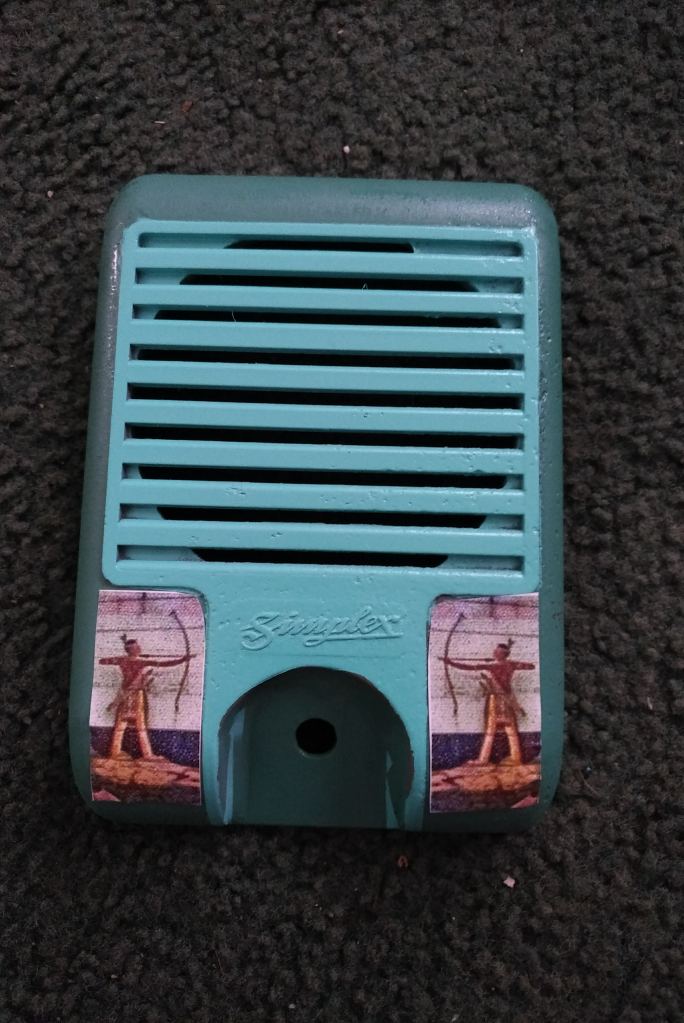 Now I’m really going into delicate territory here.  I realize that the archer here is a stylized representation of a Native American, and some will consider this imagery offensive.  In this case, however, I’m more showing the image itself as part of the original marquee, not making a personal designation on Native Americans or tribal imagery.  I also put it at the bottom of the speaker, and in a very small size.

I then detailed the “Simplex” script logo, by painting it in silver Sharpie, and then using a black Sharpie to trace around the raised Simplex letters.

It looks kinda rough up close, but in full view it’s not half bad.

Now if I’m going to put this archer on the speaker, then of course I need to add the word “MOHAWK” – in the original signage font and script that was on the screen from 1946 to 1986 – to the top of this speaker.  I tried tracing it out with pen and ink, but it just looked like something a kid would trace.

And boom.  The word MOHAWK in big red letters atop the speaker. 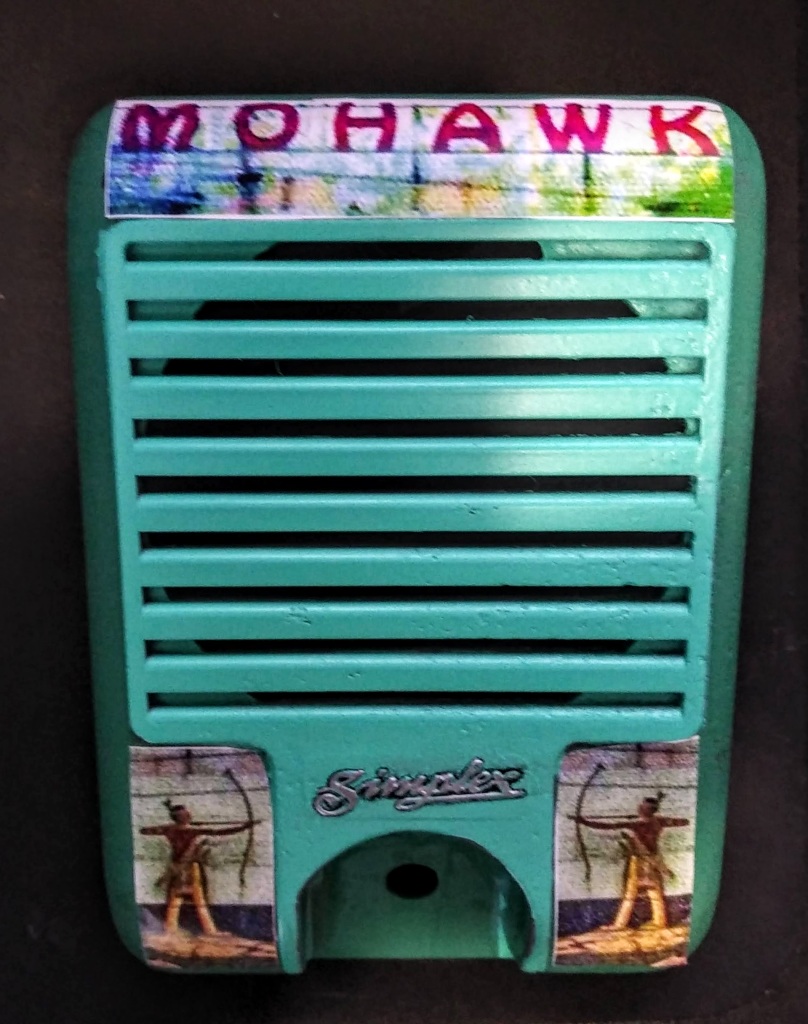 Okay, the case looks decent.  Now for the interior guts.  New inside grille, new speaker, new cables (all thanks to Detroit Diecast), and a little bit of wiring technique.

And let’s close this up.

The last time I built one of these speakers, one of my blog readers suggested that I make sure that the volume knob had a distinct color that didn’t blend in with the chassis.  So how about a bright orange-red knob, to match the bright orange-red MOHAWK signage?

But you know, as well as I do, that there’s only one way to test this speaker out.  I wired the connectors to a portable Bluetooth amplifier.  I paired my BlackBerry KEYone to provide sound.  Then I used my BlackBerry Q10 to film the results.

Because now that this is complete, it will be my second of three entries for the 2020 edition of Historic Albany Foundation’s BUILT charitable auction.  For sure.

One more artwork left to create.

And boy oh boy, if a few months of COVID-cooped-up ingenuity can create something like this…

You know the next art piece will be just as swank.

5 replies to A Capital District-themed drive-in speaker: The Mohawk Drive-In in Bluetooth