"In fidelity and gratitude to a mass peoples' movement working to establish 21st century social, economic, and human rights – including guaranteed health care, higher education, living wages, and labor rights for all people in the United States."
– @AOC#DemConvention pic.twitter.com/KbFL5xl0Uw

So you’re probably wondering why, in her speech, she seconded the nomination for the Democratic nominee for President … to Bernie Sanders.

Stop clutching your pearls.  Before anybody gets all “AOC went rogue and should have been supporting Joe Biden, she just gave the presidency to Donald Trump” screedy… let’s get some things straight.

During the primaries, while Bernie Sanders did not receive the majority of delegates necessary for the nomination, he did receive enough delegates to qualify for a courtesy nomination.  This is nothing new.  It’s a formality.  Eventually the runner-up in delegates makes a pitch to release all his delegates to the front-runner, we have a unified ticket, balloons and confetti fall from the rafters, all of that.

In fact, although AOC verbally seconded the nomination of Sanders, she did acknowledge her support for Democratic Presidential nominee Joe Biden.

Congratulations, @JoeBiden – I deeply look forward to fighting for our future together and reclaiming our democracy in November.

Thank you @DemConvention for having me deliver Sen. Sanders’ roll call nomination speech.

Well, apparently one network kinda missed that part.  And instead, they focused on who AOC mentioned in her speech … and who she didn’t mention. 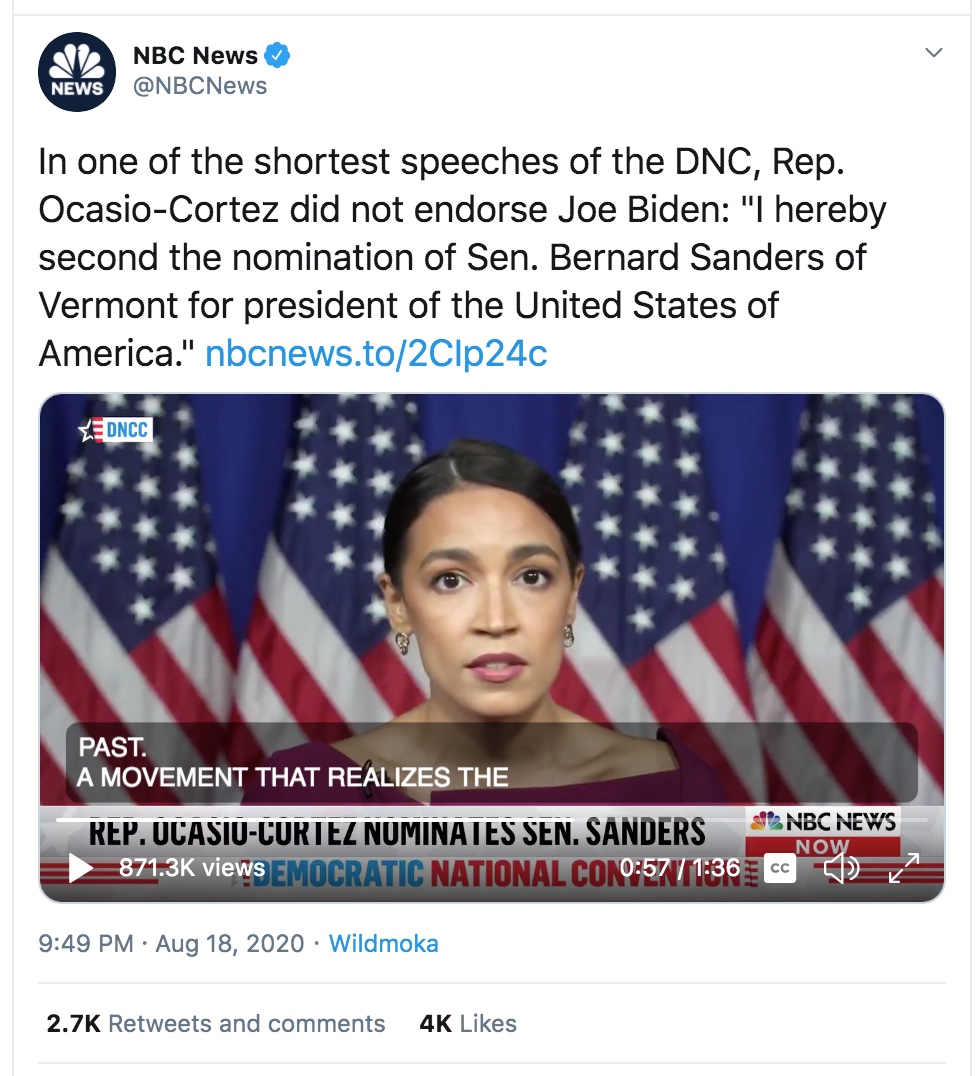 Holy Huntley-Brinkley Report, Batman.  NBC did this?  This wasn’t a prank by One America News?  I haven’t seen anything that head-scratching coming out of NBC since that time Chuck Todd said … (update whatever Chuck Todd said recently)

So once NBC released that slanted tweet, the hate started spilling in.  There’s already plenty of people who have vilified AOC for everything from working as a bartender (Quel Courage!), to her intelligence (don’t try it, she’s smarter than you are), to her belief in the rights of workers and of working families.  Hell, there’s probably some QAnon message board that links AOC to the Lindbergh baby kidnapping.

The NBC tweet just added more fuel to the fire.

Now eventually NBC corrected their statement … with a follow-up tweet in the middle of the night.

This tweet should have included more detail on the nominating process.

We have deleted the tweet to prevent its further spread, but it can be seen here for the record. pic.twitter.com/txXo4CCMOt

But come on, NBC.  You had to do AOC like this?

Of course, AOC did not take kindly to this.

If you were confused, no worries!

I was asked to 2nd the nom for Sen. Sanders for roll call.

So @NBCNews how are you going to fix the incredible amount of damage and misinformation that you are now responsible for?

Because a 1:15am tweet to slip under the radar after blowing up a totally false and divisive narrative across networks isn’t it. https://t.co/zf6Wqiotvv

You waited several hours to correct your obvious and blatantly misleading tweet.

It sparked an enormous amount of hatred and vitriol, & now the misinfo you created is circulating on other networks.

All to generate hate-clicks from a pre-recorded, routine procedural motion. https://t.co/crDlEymgMD

This is completely unacceptable, disappointing, and appalling.

The DNC shared the procedural purpose of my remarks to media WELL in advance. @NBC knew what was going to happen & that it was routine.

How does a headline that malicious & misleading happen w/ that prior knowledge?

And another thing here.  Nobody bothered to mention that AOC actually SECONDED the Sanders nomination, the original nomination was from the former president of the United Auto Workers.  But I don’t see anybody returning their Chryslers because of a Bernie nomination.

If you watch MSNBC (which I do on a frequent basis), you hear so much about how they’ve promoted the voice of women in politics.  Morning Joe host Mika Brzezinski has a platform called “Know Your Role,” which promotes the strengths of women in the world.  Nicole Wallace recently had her “Dateline: White House” increased to two hours a week, and Joy Reid has been a more-than-credible replacement for Chris Matthews at the 7:00 p.m. slot.  But when NBC puts out a tweet that makes AOC look like a turncoat … it goes against everything women in politics have strived to achieve.

And yet we instead get what amounts to twitter clickbait.  It makes AOC look like a backstabber.  And that’s not right.

Try again, NBC.  You can do better than this.