While on my Washington State vacation last October, I stopped at a local antiques store.  I figured I’d kill some time at the antiques store, look at the furniture and the bric-a-brac …

And look what I found.

$25 later, this little treasure was in my suitcase for the long trip back to New York.

And the first person who says to me, “Chuck, it’s just a burlap sack, it’s not like you found gold or anything,” to them I say, “Well … maybe I did.”

See, this burlap sack has some very funky advertising on it.  It looks like the Carter-Miller Company of Scottsbluff, Nebraska, loaded 100 pounds of potatoes in a gunny sack and sold them in that quantity.  Now I’m not sure if “Trout Potatoes” are based on size or quality or quantity or whether they swim upstream …but that’s a cool little trout on the gunny sack.

And you know what I’m going to do with this bag?

I’m going to upcycle it into some sort of tangible art piece.  You know, something that might work in Competition Season 2018.

The first thing I did was measure the bag.  The desired area space is about 21 inches by 30 inches.  I can work with this.

I also trimmed away the backing.  The previous owner of this burlap sack repurposed this into a laundry bag.  Which is fine for the previous owner, but by the time I got it the bag had an aroma of “Essence of Old Barn” mixed with “Eau de Sweat Sox” and “Jockstrap No. 5.”  By Cocoa Shanelle, no less.

I went to Jo-Ann Fabrics and purchased some yarn – the idea was to make this burlap sack into a “hooked rug” project.  And for a couple of days, I got this far. 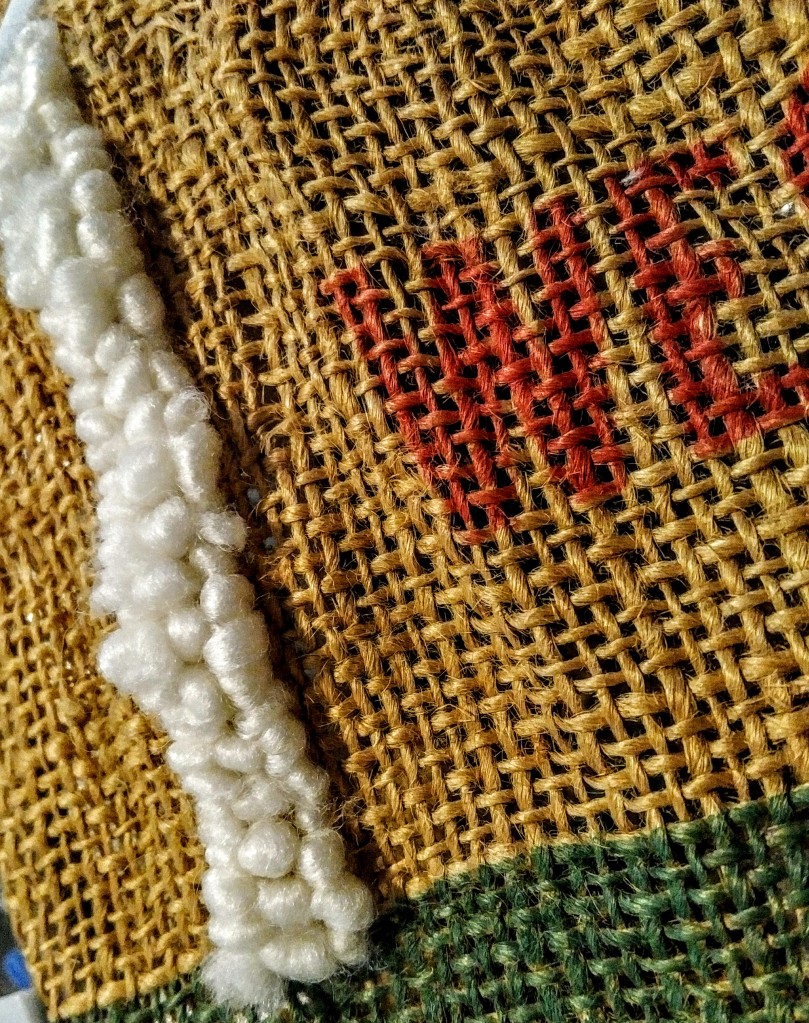 At that moment … I pulled too hard on one stitch and all the stitches came out, sputtering through like a run in a nylon stocking.  Yeah, and I wasn’t that impressed with my hooked rug skills – or, let’s face it, a lack thereof.

I’ve got all this yarn that I’ve bought, let’s try a little stitchery project.  Burlap embroidery, if you please.

For this project, I decided to use the three colored skeins of yarn I bought from Jo-Ann Fabrics – dull white, dull red and dull green – along with a fourth skein of glittery white – and with some darning needles, started threading the yarn along the burlap fabric.

This section was completed in a day.  One 21-inch stretch from edge to fraying edge.

I measured the stitch out to cover five rows.  Have to keep things standard, don’tcha know.

I then started stitching up the lettering.  Figured let’s start with the top and work down.

Let’s put it this way.  I started from the right to the left, because if I went from left to right, I could have paused mid-stitch and instead of the piece reading WESTERN GROWN POTATOES, it could have read WESTERN GROWN POT.  Which would be an entirely DIFFERENT reason for needing a burlap sack.

I tried threading the white yarn through the red lettered yarn… and as I progressed, this came out.

Say it with me, boys and girls.  Yuck.  That horizontal white row looks hella awful.

I mistakenly purchased two different thicknesses of yarns for this project, and the bulkier white yarn – something called “roving” – had a tendency to split and unfurl as I sewed it into the burlap.  Also, I was careless and lost count of my stitches, which made the white horizontal strips go out of alignment.  Nertz.

Okay, this is my final try with this project.  I’m going to make vertical stitching runs on the artwork, and will only use one type of yarn – Lionheart Wool-Ease yarn.  This way, even if I use different colors, the strands will remain somewhat uniform.

I chose five different color types – black, white, green, red, and white with a mirrored strand.  I’ll use white for the burlap background, green and red where necessary (including into the trout image itself), the glittery yarn for white lettering, and black strands for accents.

All right, let’s test my work.  I’ll outline the first “T” in TROUT.  If I like how it looks, I’ll keep going.  If not, I’ll go spend my time on another project.

Okay, next step.  Let’s do some stitching up the left side of the burlap bag, two rows of stitching and then a vertical stitch between them.  If I like how it looks, I’ll keep going.  If not, I’ll go spend my time on something else. 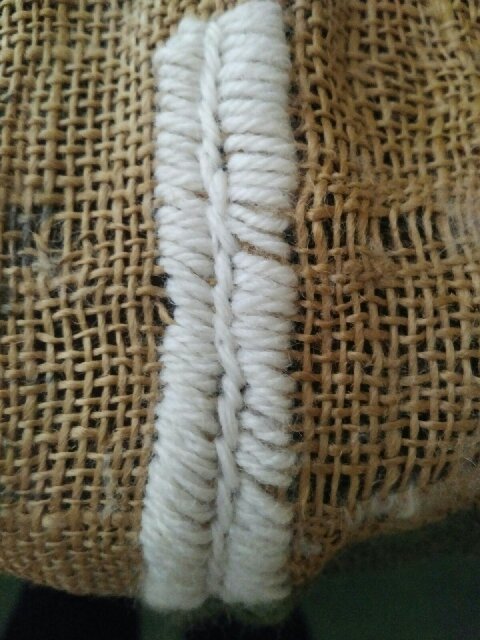 Look at me go.  I got this.  I’m feeling more confident in this project.

Hopefully I’ll finish this project by some time next year.  But as I go forward, I’ll keep all of you apprised as to my progress.  I really hope this turns out nicely.

But for now … this is the start of the Trout Potatoes Art Project.  And yes, encouragement and support would definitely be encouraged at this point in time. 😀