One wired-up piece (featuring the sign from Hoffman’s Playland), one piece from my latched hook art series (the Bob & Ron’s Fish Fry sign) and one from my ever-growing collection of Nipper photos (Nipper’s Polar Panorama).

I can only hope that the pictures hang properly and that everything will be fine.

Try not to panic, Chuck.

Try instead to concentrate on the night.

Fish out the BUILT pins that you earned from your first six BUILT shows.  They go on your suit lapel. 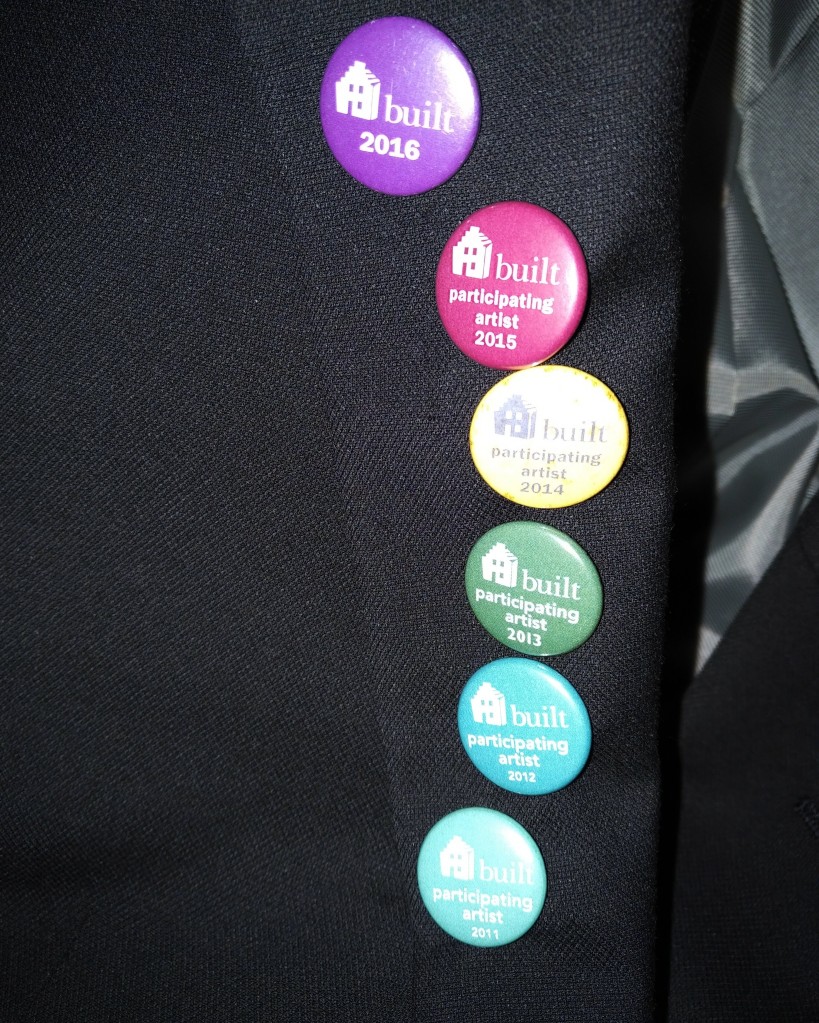 Get dressed up and dolled up and look presentable.  Don’t look like you just stumbled out of the casino with $200 missing from your wallet.  This is your chance to make a worthwhile impression on the world. 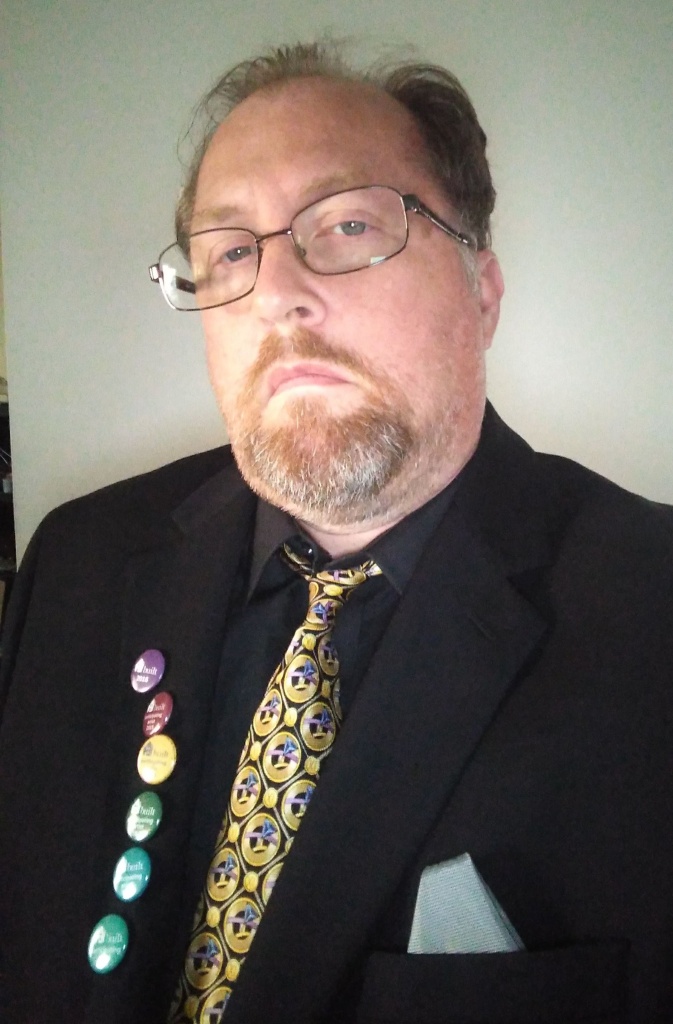 Damn, I look badass in that photo.

Oh yeah, and take a ride share to the museum.  Another tradition, which began last year.

Last year I needed cataract surgery for my eyes, and night driving was not a possibility.  So I called several cabs, none of them would be able to pick me up.  That meant I finally had to bite the bullet and install Uber on my phone.  For the most part, Uber’s been good to me – that one driver who tried to hit on my date after a Date Night notwithstanding – and so, when there’s big moments like local gallery shows, I leave the car at home and let Uber do the driving.

Dang.  Any more traditions and I’ll have Tevye the Milkman singing about some violinist on top of a house.

Okay.  Now I need to check to make sure all my pieces are here and framed up and looking good.

There’s the Hoffman’s Playland sign.  Because it was so heavy, the sign was placed on an easel rather than hanging it on one of the Historic Albany Foundation door frames. 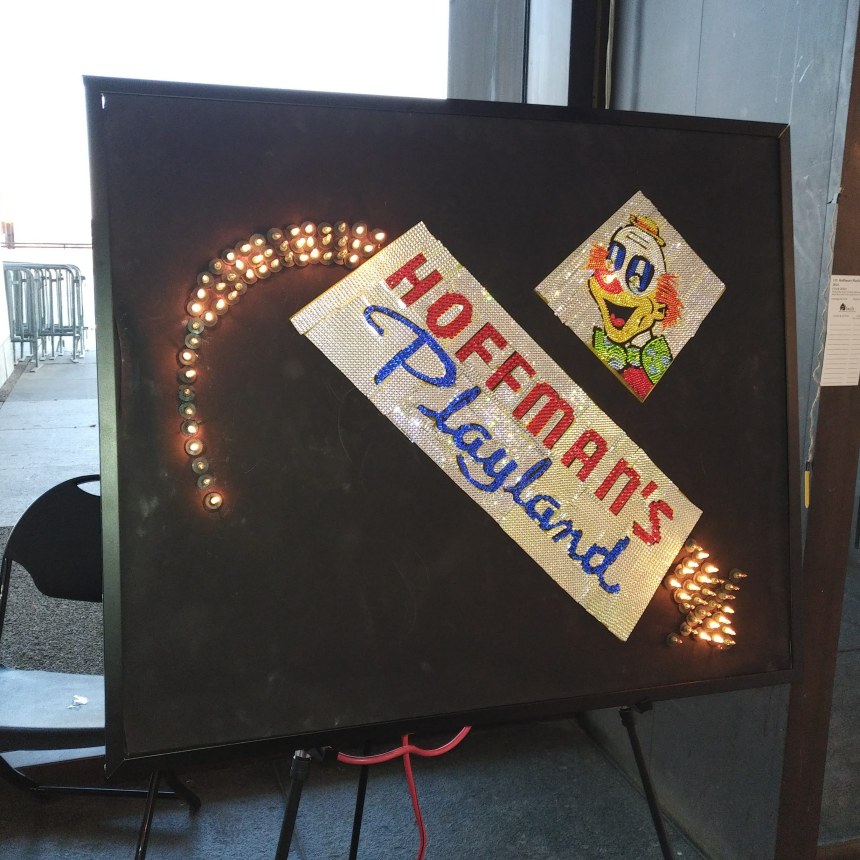 Looks nice and the lights work.  That’s all I want.

Right across from that was the Bob and Ron’s Fish Fry sign. 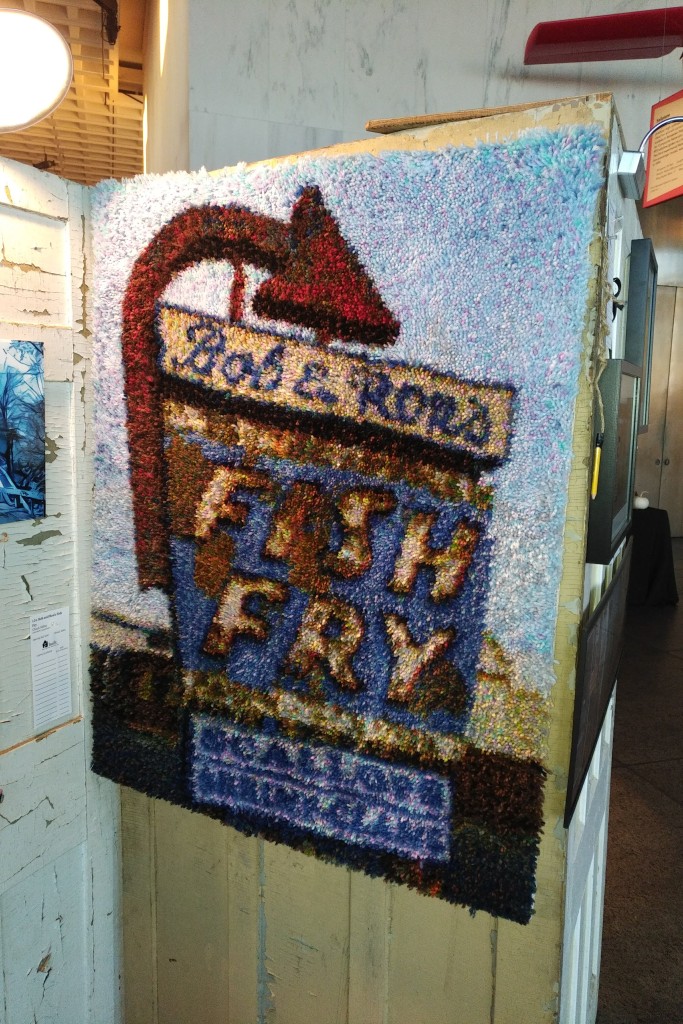 Five and a half months of work.  22,000 snippets of yarn.  60 different individual colors.  And yes, there is a difference between light cornflower, dark cornflower and regular cornflower.  And I don’t know if there was a decaf cornflower or a gluten-free cornflower …

And at the other end of the gallery was Nipper’s Polar Panorama. 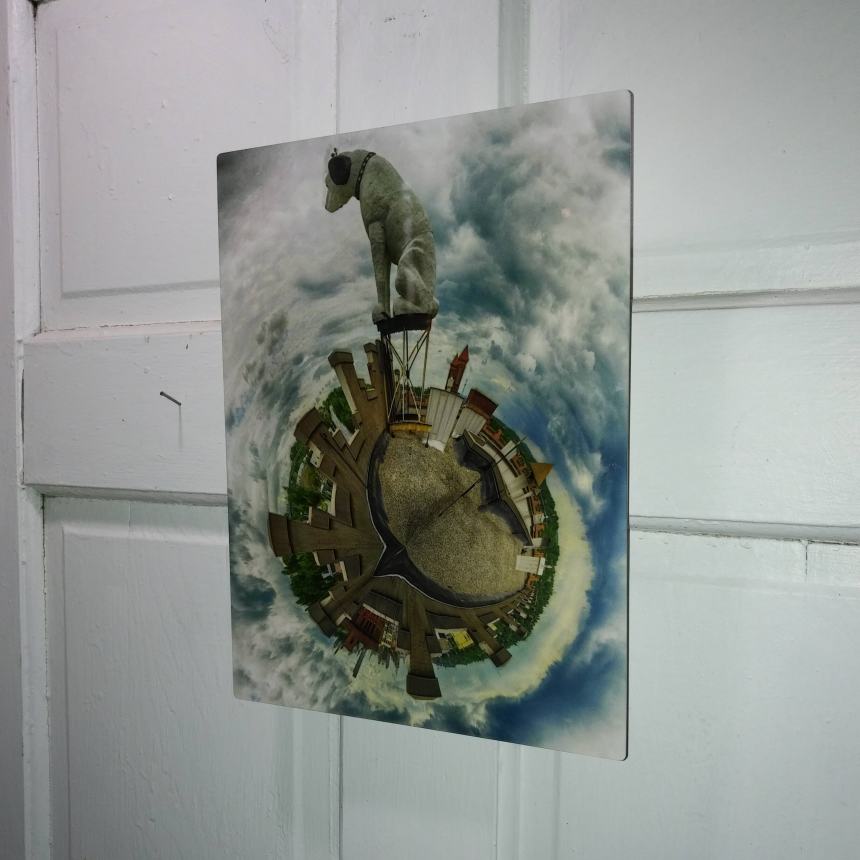 I should note that several of my Facebook friends also entered the show, including painter Robert Eaton and mixed media artist Laura Saffares Rullison.  They were there and, like me, they networked and explained their artworks and handed out contact information.

And right off the bat … the Hoffman’s Playland sign received a bid.

A short time later … Nipper’s Polar Panorama received a bid.  And another bid.  And a third bid.

My two favorite words at a gallery show.  Bidding War.

Meanwhile, I was admiring some of the other artworks in the show.  Apparently the junior artists could give some of us established folk a run for our money – for example, one of the juror’s picks was an 11-year-old’s interpretation of the Empire State Plaza as recreated in aluminum cans.  Holy.

At the same time, another artist, a 13-year-old boy whose mother jokingly referred to herself as his agent, wowed the crowd with several digitally manipulated drawings and photos.  Lots of bids for that kid.

In the end, someone put in a last-second bid and got the fish fry sign – the person who was outbid wanted the sign for a family Christmas gift, I told her I could make her a photographic print of the Bob & Ron’s sign as a private sale, which she agreed to.  This works for me.  Make two bidders happy.

As for Nipper’s Polar Panorama … I was informed that the high bidder who claimed that picture bought it in honor and in memory of Greg Haymes – Sarge Blotto – the creator of the Nippertown blog.  No greater honor that I can think of right there.

In the end … all three pieces sold.  This makes me happy.  And it gives me ideas for future artworks for BUILT.  I just have to think of them and make them happen.  Somehow.

Oh, and one more thing …

No better feeling than awesome. 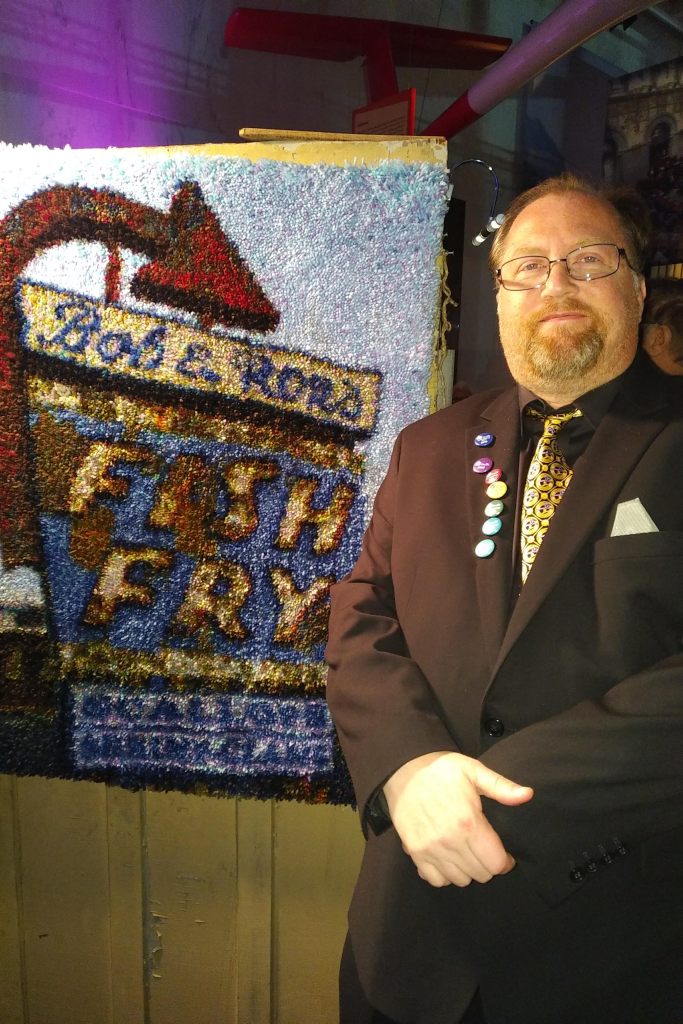