I have been a fan of professional wrestling for many decades.  Over the years, I’ve actually met and interviewed several top stars for magazine articles and the like – Bret Hart, Chris Jericho, Bruno Sammartino, Mick Foley and Ted DiBiase, to name but a few.  This is fun stuff.

And I also enjoy the current crop of wrestlers that appear today – WWE talent like Daniel Bryan and AJ Styles and Shinsuke Nakamura, AEW talent like Jon Moxley and Kenny Omega and Orange Cassidy.

Currently, my big like is a WWE tag team, the IIconics.  They’re loud, they get a lot of massive heel heat, but they keep matches entertaining at all times.  Hopefully they’ll appear at tonight’s Royal Rumble event.

Right now, the IIconics have focused on fundraising for the victims of the Australian bushfires, which have destroyed untold forests and lands throughout the nation.  They’ve actually auctioned off ring-worn outfits and T-shirts and autographed toys, with all the proceeds going toward assisting the volunteers and doing whatever it takes to stop these monstrous fires from destroying Australia.

At one point, one of the IIconics, Billie Kay, had her eBay auction throttled – probably because she was a new account.

Ok guys, it’s back up!! New auction and I’ve added signed @WWENXT @Topps cards. ALL proceeds going to help the Australian bushfires 🇦🇺🙏 Sorry to everyone that had already bid but everything is fixed now 👍 https://t.co/OaPkCl5YHq

I made an off-handed comment to her on Twitter, essentially repeating back a line she used in an interview.

They gotta be joking you, mate.

On Friday morning, I woke up, checked my social media, and discovered … I was now being followed by Billie Kay.

I’ve got an IIconic following me?

I went to check the link and …

Yeah, we got a problem. 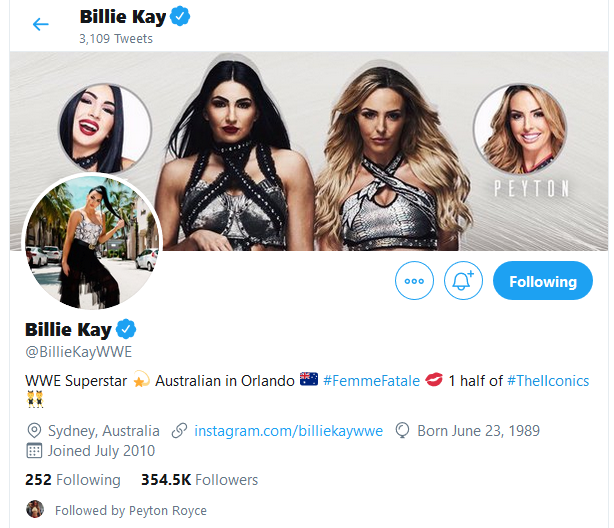 The one that “followed me” – well, it looked like this. 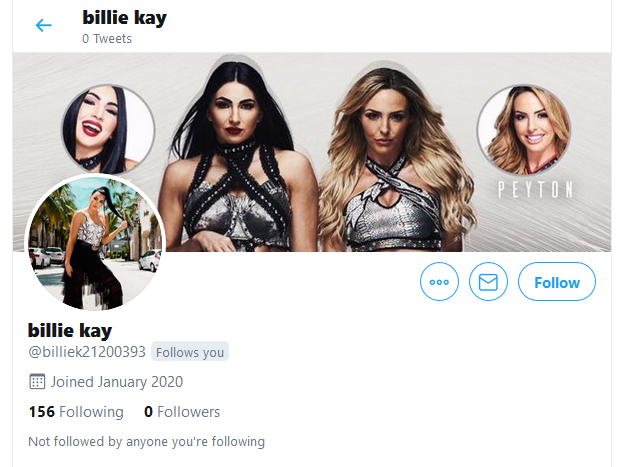 Looks about the same, doesn’t it?

The URL for one Twitter account is a name and a series of random numbers.  That account joined in January 2020.  It follows 156 people and nobody follows it.

Pay attention, Internet people.  Do NOT get fooled by fake accounts or fake contacts.  There are organizations that will scrape your name from a comment list somewhere, and suddenly you’re now on the receiving end of a crapload of social media spam – or worse.  Always check identities if you’re not sure.

All right, now that that’s taken care of …

And there’d better be some REAL IIconics in the women’s rumble match.