I’ve been fiddling around with macro photography for a while now, mixing different lenses with focus stacking techniques.  The results have been pleasing – several different flowers and petals and flora, all clipped into an alligator-clip armature, then several photos taken and stacked to bring out the sharpness.

Now I’m going back to an idea I had several years ago – to create a macro photo of the stitches on a baseball.  And luckily for me, I still had one of my old minor league baseballs.  I had some that I purchased as part of this photograph experiment, way back in 2014. 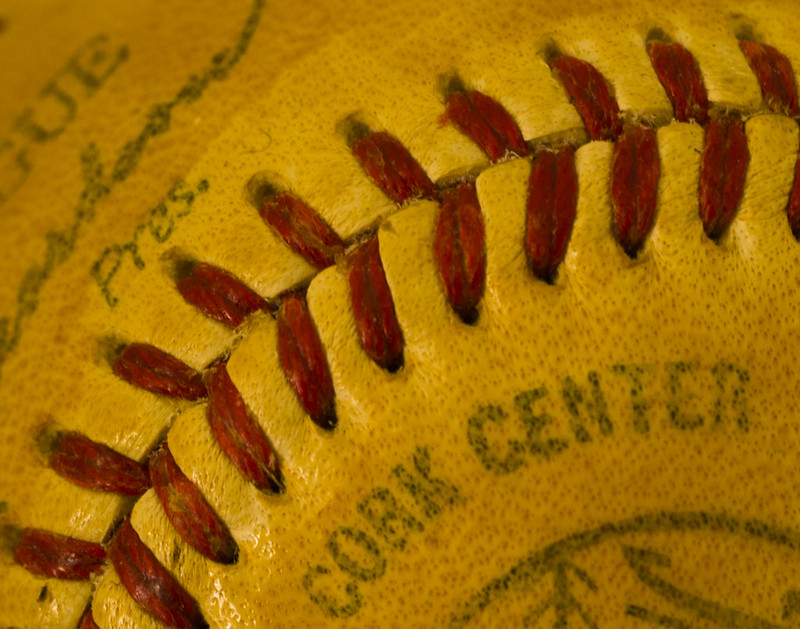 But when I looked at the photo in 2020, I decided that I wasn’t pleased with the results.  It’s just … there.  I need to get closer.

So I set up a little shoot.  I put the ball on the open top of a pill bottle, then I set up my Nikon Df with my Laowa super-macro lens, and strapped it to a Neewer manual focus rail.  I want to get so tight on this picture, there should be splinters from the bat that knocked this ball down the first-base line.

I angled the ball so that, instead of  straight shot, I would photograph along the ball’s seam.  If I was successful, I should be able to get the weathered stitches and the pock-marked cowhide.

It’s good enough.  No.  I will never settle for “just good enough.”  Besides, this looks as if it was the last thing Tony Conigliaro saw.  What, too soon?

Forty-two photographs later – with the camera creeping forward, millimeters at a time – I had another stack pile.

Now with a little focus stacking, and some adjustments in levels…

Here’s what I achieved.  Say hello to High and Tight.

That looks so powerful, John Sterling would make up a call for it.  And then Suzyn Waldman would gush about John Sterling’s call.  And I would listen to the two of them until my ears started bleeding, which usually means I can hold out for at least three pitches.  😀

2 replies to High and Tight