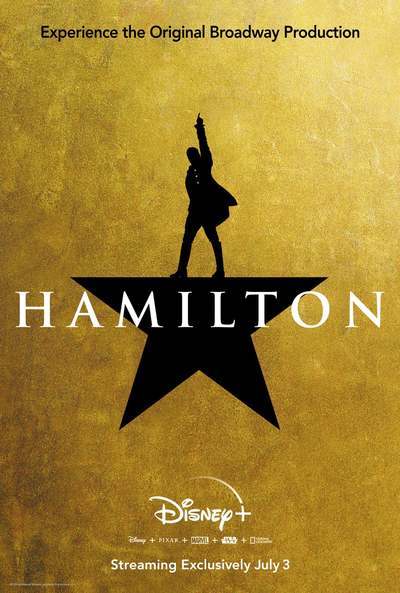 Okay, I realize this is stretching the boundaries of the rules for the Royale with Cheese Movie Club, in which I review films that everyone in the world has seen (except me).

But technically, it seems like EVERYONE has seen this Broadway show at some point or another, either in New York City or as part of one of the touring company shows.  They can sing along with the soundtrack album, they can make wink-wink jokes about not throwing away their shot, or singing da-da-da-DEE-da-da at things.

And because of the COVID-19 pandemic, what was supposed to be a movie theater debut in 2021 has been moved up to 2020.

Trust me, everybody who has a Disney+ subscription is dialed in for this movie.

So I made some snacks, sat in my comfy chair, and got ready for a Broadway show that didn’t cost me $399/seat.

First off, the show itself – with the original Broadway cast, filmed from performances in 2016 – is stunning.  I can see (and hear) why people get so emotionally involved in this musical, from the stirring songs to the powerful acting.  And that song where Eliza sings “Burn” is every moment as powerful as Jennifer Holliday singing “And I Am Telling You I Am Not Going” from the Dreamgirls musical.  Plus, with several actors playing multiple roles in the show – Daveed Diggs bouncing from being the Marquis de Lafayette to Thomas Jefferson  almost as fast as he went from the Tail to First Class in Snowpiercer – allows for different narratives in the story.

But here’s what I really enjoyed.  And it’s something I never thought I would ever see.  Follow along.

I’m going to name several movies that were made from Broadway musicals.  West Side Story.  Dreamgirls.  The King and I.  Fiddler on the Roof.  Grease.  My Fair Lady.  The Sound of Music.  You know the films, right?  And you know HOW they were filmed – with realistic sets, on authentic locations, with a cast of talented movie stars.  And there’s often an additional song or two added to the movie, so that the song could be considered for an Oscar for Best Original Song (the Broadway songs can’t be considered because they’re already from the Broadway shows).

But what I’m watching here – this 2016 performance – is the exact performance I would see if I went to the Richard Rodgers Theater on that 2016 day.  There’s no wild CGI or special effects, none that weren’t already provided by the props department and lighting specialists in the theater itself.  Do we have any footage of the legendary Broadway performances – on stage, with the original cast, with the same amount of fire and energy that made the show a worldwide phenomenon?  Not really.  Sometimes, the only examples of original Broadway performances come from when the cast members perform one of the show’s songs on The Ed Sullivan Show or during the Macy’s Thanksgiving Day Parade.  Or maybe a cast album, that’s another option.  But it’s not the same.

This is the best way to see Hamilton – yeah, they could have built stages and filmed on location (maybe recreating the famous dueling scene on that New Jersey marshland, for example), but seeing the Broadway show allows us to use our own minds, our suspensions of disbelief, to fill in everything else that’s implied.  In this, you see the true craft of the Broadway actors and actresses – making us believe that these aren’t just people singing on a stage, but are actually recreations of 18th and 19th century historical figures.  And in watching this film, you can appreciate how difficult it must be to continue these performances, twice a day, seven days a week, without breaking character or flubbing a line or letting the song’s emotions overtake you.  Wows.

Oh yeah, and I caught the shout-out to Albany in the movie.  Yeah, I see what you did there.

So I’m good with this Hamilton musical, and that’s one less film that I have in my “Royale with Cheese Movie Club” folder.  Now I have to figure out if I’m going to do Fight Club or A Few Good Men or Fatal Attraction or some other film that everyone else has seen.  Everyone except me. 😀