And yet, I’m trying one more time.  Such is the masochist in me.

And I show these postcards on my blog today as a reminder of how far I’ve come … and how far I must still travel.  These postcards are akin to what I saw in college, as my fellow classmates would post rejection letters from their job interviews on their front doors.  At the time, I thought such actions were a perverse form of bravado, almost like, “Hey, you got rejected by Shearson Leaman?  Well, I got rejected by Bear, Stearns, what do you think of that?”  Me, I would just say, “Well, I got rejected by that girl on the second floor of our dorm, so I have you all beat.”

So this year, I submitted what I thought were my four strongest photos of the past twelve months.  They included the dancing neon photo Step and Pivot, the moody shoreline photo Stone, Saltwater, Surf and Seagulls, the tulip perspective photo What The Grasshopper Saw, and my infrared shot Farrell.

You know … these four photos.

What am I trying to achieve?  I know I didn’t get out to photograph as much as I had hoped this year; but I think the ones I picked for Iowa were my strongest entries.

Some of these involved risking my life. Or my health. Or my sanity.  This is what photography means to me.  Capturing the crazy beauty of my world and turning it into something tangible.

And I keep wondering… waiting for this little yellow postcard to travel all the way from Des Moines to New York.

If you think I’m nervous about one little old postcard, wait a few weeks when I’m worried about postcards from Syracuse. Just sayin’ is all.

I looked around Facebook, checking out the photos of other photographers who entered the Iowa State Fair photo competition.  Jeez.  These photos are spectacular.  Them versus me – it would be them every time.  They’re just that damn good.

And now that little yellow postcard is on its way like a bullet with butterfly wings.

Notices on Facebook.  One person got three pictures into the show, and one of them may have earned an award.  Congrats.  But I’m still waiting for the postcard to arrive in my mailbox.

Then … it finally arrived.  The little yellow postcard, all the way from Des Moines.

Got in the house.  Sat down.  Took a deep, deep breath.  The card is face-up in front of me, the address nice and clear.

I can’t turn the card over.  It feels like it weighs five hundred pounds.

Do it, Miller.  Turn the damn card over, ya shnook.

My eyes immediately darted to the checkboxes.

Can it be possible…

My eyes slowly drifted upward, to the other clause. 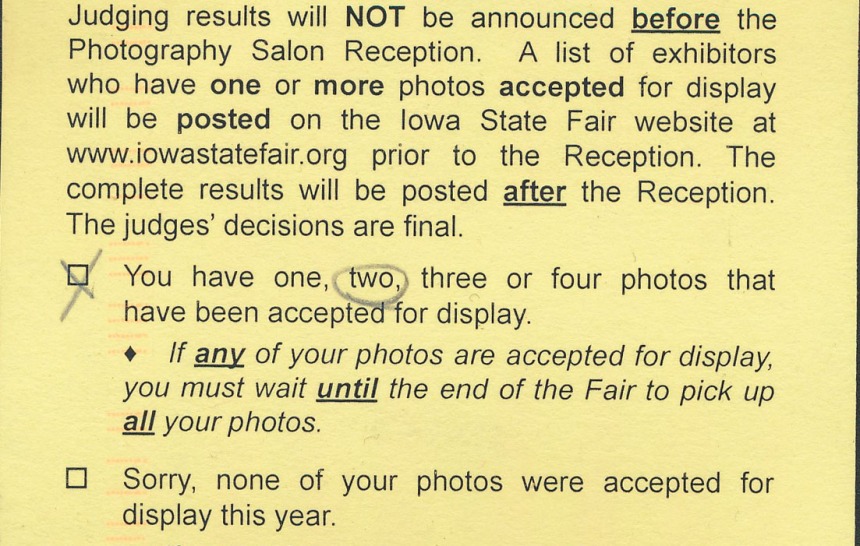 I look back at the text.

And it was there that I saw the word “two” was circled.

Two – as in TWO OF MY PICTURES ARE GOING TO BE ON DISPLAY AT THE IOWA STATE FAIR PHOTO SALON!!!!

Holy crap, Miller, third time really WAS the charm!!!  Crank up the party music, Secret Weapon!!!  I want to boogie like I’m back in high school!!!!

What’s this sticker on the card?  Probably some post office routing decal, or maybe … or …

Which means … if I surmise this correctly… at least one of my two pictures that were accepted … one or both of them were among the top three in the category, and that photo (or photos) earned first, second or third place in its (or their) category …

Secret Weapon ain’t gonna cut it by itself … I NEED ME SOME T.S. MONK!!

Two pictures on display … and at least one of them finished in the top 3 in its category… you can’t see it right now, but I’ve got a big-ass grin on my face, a grin so big it could introduce one ear to the other.

And there’s one problem.

WHICH TWO PICTURES MADE THE CUT???

And of the two pictures, WHICH ONE PICKED UP THE SILK??

AND WHAT COLOR SILK??

I looked at the card again.  Unless I can get to Des Moines and see the awarded photo(s) myself – the Iowa State Fair runs from August 10 to 20 – I won’t know until all the photos are sent back to me after the Fair is complete.

Hey, this blog reaches nationwide – are there any readers of mine in Des Moines who are planning on visiting the Iowa State Fair this year?  Wanna help a brother out and give me a report on the results?

Oh man, Competition Season just started off with a bang.

I’m definitely not used to this.

But I could certainly get used to it.