So last night, the Golden State Warriors lost their home opener, 141-122 against the Los Angeles Clippers.  The Warriors have a ton of injuries and Steph Curry is playing with some new teammates.  And the Clippers have Kahwi Leonard, who carried the Toronto Raptors on his back all the way to the NBA Championship.

So the Warriors lost that game.  And in that loss, there was a tweet from someone named Rob Perez.

First, I had to find out who the hell is Rob Perez.  Nobody I’ve ever heard of or needed to know about.

But you know what?  He dared sully the name of one of the most enthusiastic players I’ve ever known, the great Jamario Moon.

And that will not fly.

Unlike Jamario Moon, who can fly all over the place. 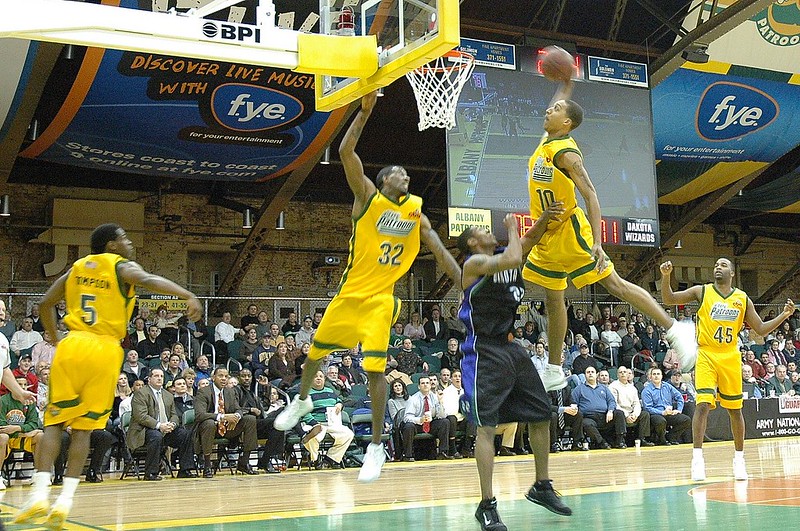 First off … let me remind you about Jamario Moon’s career.  He played for five years in the NBA.  He was a dedicated workhorse and could play the 3 or the 4 as needed.  He was a starter when he initially joined the Toronto Raptors.  He also played for the Miami Heat, Cleveland Cavaliers, Charlotte Bobcats and the Los Angeles Clippers.  During his career, he was a teammate of LeBron James, Chris Bosh, Dwyane Wade, Blake Griffin and Shaquille O’Neal.  And although he didn’t win an NBA championship, he did win a BIG3 championship this year and has been a de facto brand ambassador for that team.  Oh yeah, and Jamario spent three seasons with the Albany Patroons, and every time he joined up with the Pats, he brought the house down with sky-walking dunks and Empire-shattering blocked shots.

And if you’re looking for another Moon, let me introduce you to Xavier Moon.  Xavier, who played for the Patroons during the 2017-18 season.  And – he suited up in Canada for the London Lightning of the National Basketball League of Canada, and later for a team in Edmonton in another Canadian league, where he was named the league’s MVP.  And Xavier is currently playing for the Raptors’ Gatorade-League affiliate, Raptors 905, so he’s one heartbeat away from the NBA.

You want two more Moons?  I suspect that Jamario’s kids could dunk on you – if you don’t mind that their pathway is more likely through the WNBA.  But a dunk is a dunk, Rob Perez.

I get what you’re saying.  The Golden State Warriors have a rash of injuries right now, Steph Curry doesn’t have Klay Thompson or Kevin Durant or any of his other usual weapons.  Right now.  But that does not mean that his current lineup won’t rise to the occasion.  Teams at the top don’t rebuild.  They reload.

Oh and it might be a good idea to stop treating Jamario Moon as some sort of catchphrase for NBA failure.  Especially when Jamario Moon hears what you say, bro.

Trust me, bro.  If Steph Curry gets Jamario Moon, Xavier Moon, and two scrubs from the stands, the Warriors could still win the NBA championship.

Felt good to get out there and do work in the armory again. Felt even better to get the W and catch up with some old friends #YouSeeTheMoonThrowback #StillGrinding #ForTheLoveOfTheGame

Yeah.  We ready to throw down, clown.

And next time, if you’re going to use an NBA player for your feeble attempt at a figurative comparison … Perhaps Korleone Young would be more of your speed.