I really have to hand it to the Jericho Drive-In.  They’ve been able to rise above this godawful pandemic and make a movie season worth enjoying.

It seems like each night, there’s something special happening at the Glenmont ozone movie palace.  They’ve hosted a dozen high school graduations, they’ve hosted a wedding (which was later reported on in the New York Times), and now they’ve partnered with Proctor’s Theater to show special concert/movie events. 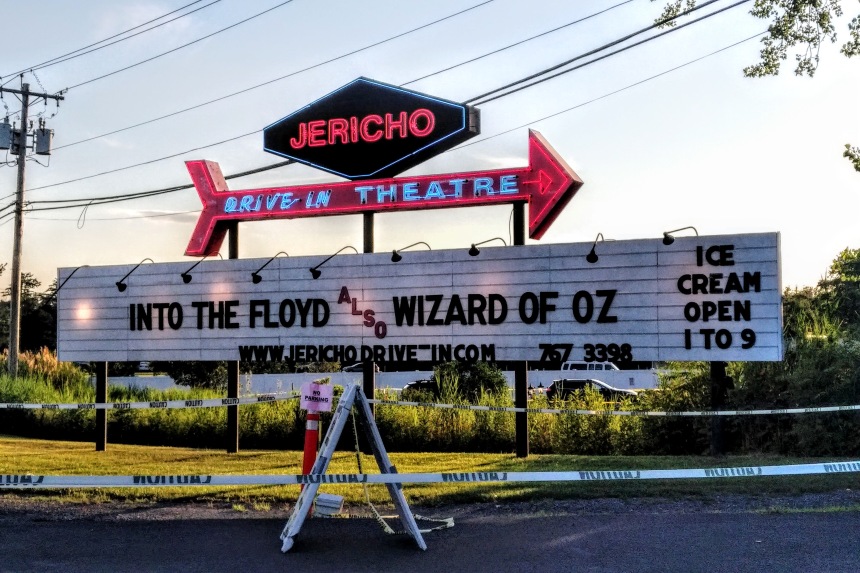 So what if it was a school night?  So what if I had to get up early this morning?  This sounds like a lot of fun.

I parked my Chevy Cruze “Dracourage” near the front of the drive-in parking area.  I’m going to need me some eats, I mean, this is a drive-in.

This is also 2020, and the Jericho set up a new ordering system, where you select and pay for your meal on your phone, you wait for a text that your food is ready, then you pay for your meal online, you leave your car (mask over your nose and mouth, I mean, because COVID-19), walk over to the concession stand and get your munchies, all ready to enjoy.

And enjoy I did.  Nothing like drive-in food.  Tasty deep-fried mozzarella sticks with raspberry dipping sauce … yum-o…

The Pink Floyd tribute band “Into the Floyd” were finishing their soundcheck.  Everything sounded decent.  And all the patrons did a fantastic job of following social distancing and masking guidelines.  Prior to COVID-19, you could park two cars between the parking posts – the old posts that used to hold vintage drive-in speaker boxes.  Now, if you park one car and make sure it’s equidistant between the speaker poles, you’ve got plenty of social distancing room.

And I found a pole that still had the plastic components for an old junction box.  As you know, I’ve been on a drive-in speaker restorative kick of late… and I had a couple of repainted (but not fully functional) speakers in the car.  Time for a quick photo shoot, a little test run to see how they would look if I actually DID set this up as an ersatz photo shoot. 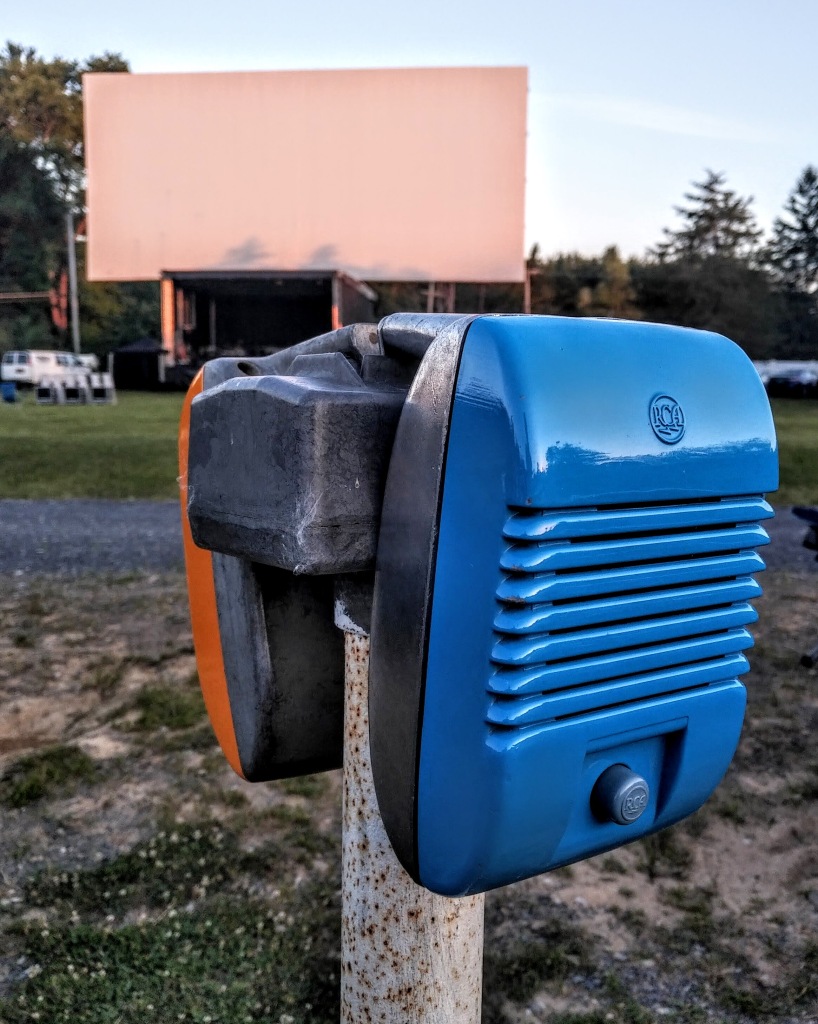 An RCA speaker box, painted medium blue.  That looks impressive.  Let’s try the other one.

Nice, a Ballantyne hanger in school bus orange.  I can live with this.

It’s getting dark.  Film’s about to start.  And so’s the concert.

And at the third roar of the MGM lion … the opening notes of “Breathe.”

And we’re on.  It sounds a little something like this.

I have to give it to the Into the Floyd band, they did a great job synchronizing the classic Pink Floyd LP to the classic motion picture.  You could pick up some waycool comparisons, and you knew they were cued up when Dorothy opened the door to the first Technicolor views of the Emerald City, and you heard the opening cash registers of “Money.”  And when the Lullaby League and the Lollipop Guild made their entrances, yep, it was time for “Us and Them.|

But here’s the question I had.  Dark Side of the Moon is only about 45 minutes long, it ends just as Dorothy and the Scarecrow meet up with the Tin Woodsman.  So what’s going to happen with the rest of the movie?  Does it switch back to the 1939 MGM soundtrack?  Does the band play Dark Side of the Moon again?

Nopes.  They introduced themselves (to a chorus of appreciative flashing headlights and horn beeps), and they gave us a seven-song encore of classic Pink Floyd tracks.  They started off with “Shine On You Crazy Diamond” and “Welcome to the Machine,” jumped to “Learning to Fly” and “Another Brick in the Wall (Pts. 1 and 2),” segued into “Run Like Hell” (by this time, Dorothy and her friends are about to enter the Wicked Witch of the West’s castle), and by the time Dorothy found there was really no place like home, Into the Floyd had finished their encore with “Wish You Were Here.”

Total fun, great experience.  I’m telling you, if you have a chance to do a drive-in movie at the Jericho, or at any of the other Capital District drive-in parlors, do so.  This is a unique world we’re in right now, and entertainment like this will totally make your night.

FTC Disclaimer:  At no time did I request or receive any compensation or remuneration or benefits for this review.  The opinions expressed in this review are my personal opinions and are not influenced in any way by the management and/or staff of the Jericho Drive-In.